On April 6, the New York Yankees will open their regular season against the Toronto Blue Jays at Yankee Stadium. But all eyes will be on third baseman/designated hitter Alex Rodriguez, who will be playing in his first regular season game since being suspended for the entire 2014 regular season after violating the league’s substance abuse policy–again. It was reported that he, along with a list of other Major League Baseball players, bought performance enhancing drugs (PED) from Tony Bosch, a drug dealer at the Biogenesis Center of America.

Since this was not the first time Rodriguez was caught using PEDs, he was suspended by the MLB for 211 games. He has previously admitted to taking banned substances while playing shortstop for the Texas Rangers from 2001-2003.

At 39-years-old and after not playing professional baseball in over a calendar year, what can the Yankees expect from him? Rodriguez also missed a majority of the 2013 season while recovering from a torn labrum in his hip. In addition, the Yankees in desperate need of a third baseman traded for Chase Headley from the San Diego Padres at the 2014 trade deadline. Throughout his time in New York, Headley compiled a batting average of .262, hitting six home runs and 17 RBIs.
Considering that Headley is younger, a better fielder and recently signed a four-year deal with the “Bronx Bombers,” Yankee fans can expect Headley to be their everyday third baseman, but he has been practicing at first as well in order to get Rodriguez some time at third base. Manager Joe Girardi will more than likely use Rodriguez as the everyday designated hitter, with the occasional start at third base to give Headley a day off.

Throughout the regular season Rodriguez will play his first road games in over a year, likely receiving a loud chorus of ‘boos’ at every one, especially Fenway Park, home of the rival Boston Red Sox.

But Rodriguez is certainly used to this, considering that he has spent his entire Yankee career making questionable decisions, such as opting out of his contract publicly during Game 4 of the 2007 World Series between the Red Sox and Colorado Rockies. Also in 2007 he screamed “ha” as he was running around the bases to distract Toronto Blue Jays third baseman Howie Clark from catching a fly ball, which is  against the “unwritten” rules of baseball. As long as he stays healthy this season, Rodriguez is expected to pass Hall of Famer and beloved outfielder Willie Mays for fourth most home runs in MLB history. Rodriguez has 654 home runs, Mays has 660.

This spring training, Rodriguez has surprised scouts and experts with his solid play. He has a .269 batting average, along with two home runs and a .384 on base percentage. Not bad for someone who has not faced professional pitching in quite some time.

While it looks as though the Yankees will struggle to make the postseason, all baseball fans will be entertained with Rodriguez this year. It is well known that he is not capable of staying quiet and just playing the game.

Buckle up, it’s going to be a wild ride. 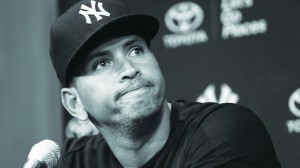