The NFL Free Agency frenzy has come and gone, and it didn’t disappoint. In one of the more exciting free agency periods of recent memory, numerous big name players signed with new teams or were part of a shocking trade. With free agency now in a major lull, lets see who will be playing for a new team this season.

Ndamukong Suh:  From Detroit to Miami

After signing the richest defensive contract ever,  defensive tackle Ndamukong Suh will be taking his talents to South Beach. The Miami Dolphins netted Suh for six-years $114 million and a whopping $60 million guaranteed. Putting the money aside, this deal is a win for Miami and Suh. For Suh, he gets a lot richer and the Dolphins acquired one of the most dominant players in the NFL. Despite losing Jared Odrick and Randy Starks, Miami will still possess a vaunted defense that will pair Suh with Cameron Wake on the line. While the money will be a nightmare for Miami after this season, it was a necessary deal for a game-changing player.

A mere 15 minutes into free agency, the NFL world was caught off guard by a pair of shocking trades. The Sam Bradford-Nick Foles trade was one of them. The St. Louis Rams and Philadelphia Eagles agreed to swap their quarterbacks and draft picks. While possessing vast potential, Bradford has not been able to stay on the field and is currently coming off consecutive ACL tears in the same knee. He was also scheduled to make $13 million this season, the final year of the last ridiculous rookie contracts. That number is one the Rams could not carry, which helped lead them to a refreshing QB change. Luckily they were able to find a trade partner willing to take that contract. Enter Nick Foles who had an unbelievable 2013 where he tossed 27 touchdowns and only two interceptions. Last season Foles came back down to Earth and ended up breaking his collarbone halfway through the season. This trade has the potential to be beneficial for both sides: the Eagles get a QB who has flashed his potential and are hoping he can regain his form from  his rookie year under QB guru Chip Kelly, while the Rams usher in a new era with a cheaper, solid and a less injury-prone quarterback.

The Return of Revis Island:

This past season, cornerback Darrelle Revis played stellar football with the New England Patriots which ultimately yielded his first Super Bowl ring. Now with a Super Bowl victory in tow, Revis continued his mercenary-like tactics in free agency as he went to the highest bidder once more. This time that team happened to be the New York Jets, with whom Revis spent his first six seasons. New York signed him to a five-year, $70 million deal. This is a deal the Jets had to make to stabilize the weak back-end of their defense and who better to do that than the best cornerback in the league? Revis will take the pressure off the young defensive backs by shadowing the opponent’s best receiver. For Revis he gets the money he wanted as well as the opportunity to come be the Jets prodigal son once more.

In an utter shocker, the New Orleans Saints traded all-star tight end Jimmy Graham to the Seattle Seahawks for center Max Unger. This was a painful yet necessary trade for New Orleans as they try to climb out of salary cap hell. Seattle gets one of the best tight ends in the NFL to bolster a position that has been underwhelming for them. The Saints did not get completely robbed, as they acquired the underrated Unger who is a strong stable (and cheaper) option at center. Seattle should be thankful for the Saints fire sale, it could be the difference between winning or losing the Super Bowl this year. 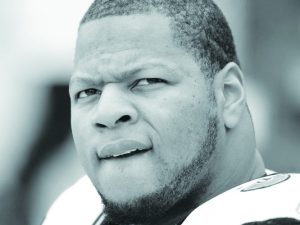