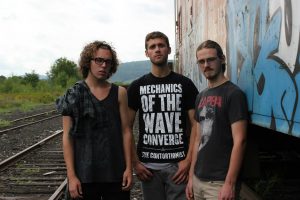 The State Times recently caught up with local metal band Sever The Albatross. The band is coming off of playing the Winter Meltdown Festival at the Oneonta Theatre and their debut EP Detachment is now available on bandcamp.

Taylor Hoysradt: How did Sever The Albatross get its start?

Wyatt Ambrose: Ben Kuettel and I started jamming a few years back and during the time that Ben had started writing some of the first material for the EP. Alex and I had been jamming for years so he was our first choice for vocals. Once we started recording the album, we put up posters at SUCO to find a drummer and Ben Rudolph answered the call. Now we’re here.

TH: What was the inspiration behind the name?

Alex Van Duesen: The name came from the poem “The Rhyme of the Ancient Mariner.” In the poem, an albatross is a metaphor for a curse. To “sever the albatross” is to disconnect yourself from the rest of society, free from bias, free from corruption. It means “sever the curse” essentially.

TH: How would you describe your sound?

Benjamin Rudolph: What I can say is that we are influenced by bands like the Contortionist, Veil of Maya and Between The Buried And Me. However, in order to really understand our band’s sound, as it is with pretty much any band, you’ll just have to see us play live.

TH: Describe the process of creating your debut EP Detachment:

AVD: We traveled up to Albany many times to record and had a good relationship with the guy

TH: Describe the process of creating your debut EP Detachment:

AVD: We traveled up to Albany many times to record and had a good relationship with the guy who recorded us. We wanted to make it sound exactly how we envisioned it. We were happy with every song we wrote for it and how it turned out.

TH: What was your first gig and what was it like?

WA: A battle of the bands at Gallagher’s. A lot of people came out and I was very happy with our performance but it was super weird. We’re pretty heavy and we played with like a pop-punk band which was very strange. Someone covered a Kanye West song if that gives you any perspective.

TH: You recently played Winter Meltdown at the Oneonta Theatre, how was that experience?

WA: I loved it. Alex and I used to go these types of shows all the time in like 8th grade, and I was always so inspired afterward to start a band and get on one of those bills. This was sort of a dream come true from that perspective, especially because we played alongside “Godiva’s Eyes” which was probably the local band that inspired me the most growing up.

TH: What kind of branding/marketing techniques do you implement to get your name out there?

Ben Kuettel: We like to do a little bit of everything. Social media is obviously important, the internet and various other rapidly evolving technologies are great tools that bands can use for advertising. We made posters at SUCO for finding our drummer and for our past shows. Finishing our EP was important for our advertisement too because it stands as proof of all the hard work we did writing it. The best advertisement for your band is to make music you love.

TH: What are your feelings toward today’s metal scene?

BR: I like that the music that can be defined as metal has become very diverse and for that reason, the people who make up the metal scene are also very diverse.  All of this diversity makes the metal scene very stimulating and something that rarely gets boring for me.

TH: What is the ultimate goal for the band?

AVD: We want to go on a headlining tour, and to have people love our music too. I’d love to walk down the street and have someone come up to me and say, “Hey you’re the guy from Sever The Albatross!” We want to stay close friends with our fans and make music that we love as well.

TH: What does the future have in store for you guys?

BK: Our future is to keep writing music we love. I think I speak for all of us when I say that the music we write, play, listen to, and share is really doing what we love to do. We all enjoy doing this; we would listen to our music even if we didn’t make it ourselves. The most important thing is to have fun in life. We believe good things come to people who follow the truth within them. We want to live positively, while simultaneously growing our music and ourselves as people, all while making the most out of this crazy experience known as life.