With the upcoming 2015 season, the Buffalo Bills have cemented their plan of attack with the signing of former Jets Head Coach, Rex Ryan: the Bills will be built around defense. Ryan has always been a defensive minded coach, leading the Jets to two consecutive AFC Championship games in 2009 and 2010. It is no secret  that the Bills already have a stout defense. In fact, their defensive line could have sent all of their starters to the Pro Bowl without hesitation, however, defensive tackle Marcel Dareus and  defensive end Jerry Hughes were left off.  The talent on the defensive side of the ball is limitless. Tackling master Kiko Alonzo will also be returning from injury this year, which should complement Brandon Spikes nicely up the middle. A young, deep group of safeties and corners round out this potent mix which will mean a solid defense in Buffalo for a long time.

On offense, although there are a few concerns, the future looks bright at Ralph Wilson Stadium. Third year quarterback, E.J. Manuel out of Florida State looks to be the man at Orchard Park. Manuel struggled with consistency his rookie season and was benched last year for veteran Kyle Orton. Orton has since retired, leaving the spot vacant. So far Bills management has only signed career back-up quarterback Jeff Tuel to the reserve roster.

If Manuel can work on his accuracy, then he has the potential to be a good quarterback in the NFL. The Bills offensive schemes are based on a powerful running back combination of C.J. Spiller and Fred Jackson, so the passing game will most likely see simple routes that give Manuel the opportunity to get the ball to Sammy Watkins. Slants and posts will be common in this offense, as it will be up to Watkins, veteran tight end Scott Chandler and Robert Woods to make big plays. Chandler gives the Bills a big red zone target as Woods and Watkins have shown their ability to turn short passes into big gains.

The offensive line will need to be improved this offseason to ensure  that the Bills have a fighting chance in AFC East. The major signing so far has been the signing of controversial guard, Richie Incognito. Incognito, famous for his harassment of former teammate Jonathan Martin on the Miami Dolphins, was a stalwart in South Beach. The Bills needed to bolster their line and they have with this signing. However, Incognito’s off the field issues could come back to haunt the Bills. But as long as he produces on the field, management could handle almost anything.

Free agency could make or break the Bills 2015 run. Unrestricted free agents Jerry Hughes (DE), Jarius Wynn (DE), C.J. Spiller (RB), Brandon Spikes (ILB) and Da’Norris Searcy (S) will have to be dealt with. Hughes, Spiller and Spikes are must signs if they wish to success in the future. Wynn, a promising young defensive end who broke out in 2014 would also be an important signing for the defense. The road the Bills take in the offseason could depend on the future of C.J. Spiller. Spiller, who played in just nine games in 2014 due to a broken collarbone, could be stolen away by any team looking for a powerful back, including the division rival New York Jets. Although the running back core is deep, Spiller is an obvious weapon for Buffalo.

If Spiller were to go however, all is not lost.  San Francisco running back Frank Gore has expressed interest in leaving the 49ers. His consistency and veteran leadership would only help to aid a young quarterback. In addition, Mark Ingram from New Orleans could be a key back to watch if Spiller leaves. His size and power are similar to Spiller’s, so the offensive scheme will not have to change. Receivers Miles Austin and Eddie Royal may also be possibilities for the Bills. Their experience could assist in Manuel’s quarterback development, as well as provide him another playmaker in the slot.

The Bills will have to be smart in the 2015 draft, having traded their first and fourth round picks last season to the Cleveland Browns in order to obtain Watkins. An offensive tackle will most likely be a priority. Their second round pick still gives the Bills a shot at quality guys such as Cedric Ogbuechi from Texas A&M and Andrus Peat out of Stanford. Ali Marpet out of Division III Hobart could be a late round steal for any running team. He recorded the fastest 40 time of any lineman at the draft, and fast linemen really help running teams like the Bills. 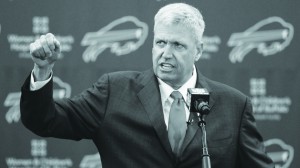