On November 11, Dallas Mavericks forward Dirk Nowitzki accomplished two milestones in a single night. He passed Hakeem “The Dream” Olajuwon for ninth on the all-time scoring list and for most points by an international player. Nowitzki moved into tenth on the scoring list last season after he passed Oscar Robertson and has continued ascending in the history books. Since he came into the league from Germany in 1998, Nowitzki has established himself not only as the best player in Mavericks history, but also one of the greatest players ever. While his defense is the weaker part of his game, Nowitzki is one of the NBA’s toughest offensive threats with the combination of his shooting prowess and size.

The seven-foot Nowitzki has been lighting up the league with his signature one-legged fade-away for 16 seasons and shows no signs of slowing down, which is good for the Mavericks, who have enjoyed a golden age with him. Since he joined the team, Dallas has made the playoffs in 13 of his 16 years, including two Finals appearances and one NBA Title in 2011. The 2011 Playoffs was the finest moment of his career, not only because he won the title he had long desired, but because he posted one of the greatest playoff performances ever. Nowitzki carried the Mavericks scoring 27.7 PPG while shooting 49 percent from the field, 46 percent from behind the arc, a ridiculous 94 percent from the foul line, along with eight rebounds per game. Nowitzki’s playoff numbers are very similar to his regular season stats, showing he is about as consistent a player as anyone in the league.

This past offseason the Mavericks handed Nowitzki a three-year, $30 million contract, much less than he is worth, because Nowitzki chose bettering the team instead of his pockets. This also showed Dallas’ faith in the “Big Germans’” ability to continue playing at a high level as he gets older. It is not far-fetched to see Nowitzki playing until he is 40 since his game is low to the ground and centered on technique and fundamentals rather than raw athleticism. If this is the case, expect Nowitzki to continue to climb the all-time scoring list.

Right now Nowitzki sits in ninth place with 26,989, only 324 away from Elvin Hayes in eighth with 27,313. Barring serious injury, he will overtake eighth place. It won’t stop there, as Nowitzki could also pass Moses Malone (27,409) for seventh place this season. Assuming he plays out his contract, he could jump to as high as sixth, where Shaquille O’Neal sits with 28,596 points.
When its all said and done, Nowitzki will retire as the greatest Maverick of all-time, one of the NBA’s top scorers, a Hall of Famer and one of the best players the game has ever seen. 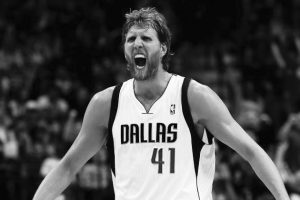