As winter rolls around the corner in Oneonta, talks of peppermint mocha, warm sweaters and cuddling fill the cold mountain air. Isn’t it the perfect time to go for a walk and Instagram a snowy pond with friends, dreaming of eating grandmother’s homemade pies during the upcoming Thanksgiving break? Wrong! Winter is the perfect time for the masculine masses of Oneonta to rise up from their clean-shaven stupor and grow the facial badge of manly honor known as the beard. No-Shave November may be coming to a hairy close, but don’t shave that fuzz just yet. Those facial follicles can improve your health, love life, confidence and ultimately, your happiness.
According to researchers at The University of South Wales in Australia and London, beards act as a testosterone-fueled force-field that can protect against cold weather, harmful UV rays, aging and sickness. In every case, thicker and longer beards are preferred as they offer more coverage and insulation. For example, if you are walking around Oneonta on a cold, windy and sunny afternoon your skin will be hit with sunlight, dry and cold air and allergens from decaying leaves. With a beard, direct UV Rays will be refracted away from your face. Cold air will be deterred because the warm air trapped around your face in the beard acts as a buffer from the harsh Oneonta winds. Oil produced by the facial hair can keep your skin naturally moisturized. Even the frequency of allergy attacks can be reduced because a bushy mustache under your nose can filter some of the sticky allergens out of the air. Not only are beards the best thing you can wear on your face, they also make your face way more attractive than it already is.
I decided to do some research of my own on the popular social app Yik-Yak by posting “Girls who like guys with beards” and received over 40 up votes. Notable comments on the post were “Everything feels better with a beard” and “ Beards are so sexy.” After asking a few female friends to elaborate on those comments, I learned that beards can make a guy look older, tougher and more manly. However, the type of beard makes a big difference in improving a man’s physical prowess. In a study conducted by the aforementioned researchers of the University of South Wales in an article from Ask Men magazine, written by Chris Aung-Thwin, men and women were asked to rate photos of mens’ faces with beards in four categories: clean-shaven, five-day stubble, 10-day stubble and full beards. While men thought that the clean-shaven faces were the most attractive option, women thought they were the least attractive. Women felt that the 10-day stubble was the most attractive beard a man could grow. In fact, the study also discovered that women perceived men with full beards to be better and more protective fathers.
With all of this positive evidence about beards, every man should seriously consider growing one if they can. A multi-purpose, healthy-living supplement for your face that makes you look better and requires no skill or effort to grow? “Where do I sign up?,” says Average Joe. “You signed up when you were born,” said the salty sea captain standing in the corner of the room. “Dad?” says the Average Joe. “Son?” says the salty sea captain. Hugging ensues and life begins again. 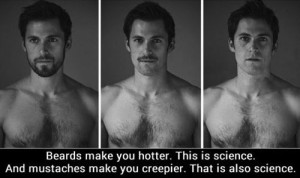