The 2014 World Series was one of the most tightly contested matchups in recent memory. The  battle between the Kansas City Royals and San Francisco Giants was the first World Series to go seven games since 2002. Both teams made the playoffs as Wild Card berths as the Giants went on to defeat the Pittsburgh Pirates (one game), Washington Nationals (four games) and St. Louis Cardinals (five games). The Royals beat the Oakland Athletics (one game), Los Angeles Angels of Anaheim (three games) and Baltimore Orioles (four games).

In Game 1, Kauffman Stadium was rocking as Royals fans got their first taste of a World Series since 1985. The pitching matchup was the premier one of the series with Giants and Royals aces Madison Bumgarner and James Shields, respectively, taking the mound. However, this would turn into a lopsided matchup as Bumgarner, as he had done all postseason, shut down Kansas City’s bats as San Francisco took Game 1, 7-1. Kansas City rebounded in Game 2 behind a strong performance by Yordano Ventura and Kelvin Herrera. The Royals’ offense woke up as well, scoring seven runs with key contributions from Lorenzo Cain and Salvador Perez.

With the Series tied 1-1, play moved to San Francisco. Since the Giants are a National League team, DHs were replaced by pitchers in the lineup. This change meant that the Royals couldn’t play slugger Billy Butler and altered the dynamic of their team. It was clear in the three games in California that the Royals were not the same offensive team when abiding by the NL’s rules. Kansas City took Game 3 by a score of 3-2, but dropped the next two 11-4 and 5-0. Bumgarner shut down the Royals yet again in the Giants’ 5-0 victory, pitching a complete game shutout. Pablo Sandoval and Hunter Pence led the Giants offense with a potent 1-2 punch in the lineup.

With the Giants up 3-2, the Series went back to Kansas City for the final two games. With their backs against the wall, the Royals put together an all-around performance as they beat the Giants 10-0, forcing a do-or-die Game 7. The Royals knocked Giants starter Jake Peavy out of the game in the second inning after scoring seven runs. Eric Hosmer, Billy Butler and Cain led the Royals’ attack.  But Game 7 was a tense, hard fought game that remained close until the very end. Sandoval exploded for four hits and, as the Giants took a 3-2 lead in the fourth inning, never looked back. In the fifth inning, San Fransisco brought in Bumgarner on two days’ rest to pitch.  Was it risky? Yes. Was it worth it? Absolutely. He went on to retire 14 batters in a row, pitching five scoreless innings and earning the longest save in World Series history. The Giants won their third title in six years and Bumgarner took home the MVP award. 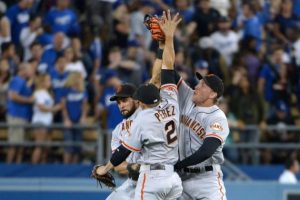