Miss St. has benefited from four home games in the early parts of their schedule, but they have beaten high ranked LSU, Texas A&M and Auburn so far. The rest of their remaining games give this team a pretty good chance to finish the season undefeated, with the only real challenges being Alabama and Ole Miss. This is not to underscore what this team has done. They started the season unranked and skyrocketed to number one in the country.  The Bulldogs have scored over 33 points in every game thus far and ranks in the top 15 in Rushing yards per game (264.3) and Points per game (41.8). Mississippi State has a two-punch combo running the ball with the mobile quarterback Dak Prescott and running back Josh Robinson, who have combined for 1,265 rushing yards and 16 rushing touchdowns. This is a team that will wear out the opponent by running consistently and effectively. Make no mistake the Bulldogs are for real and will be an interesting team to watch come playoff time.

Meanwhile on the other side of Mississippi, Ole Miss is following a similar path in the ranks of elite NCAA teams. They have beaten Alabama, Texas A&M and Boise State, all of whom were ranked at the time. For the most part Ole Miss has dominated every game they have won, winning by an average of 24 points. Senior quarterback Bo Wallace has been having a strong season throwing for 17 touchdowns, 1900 yards, and a 65.6 completion percentage. While the offense has been solid, it is the defense that has been leading the way for. The defense ranks in the top 20 in every major defensive category and is number one in the country in Points allowed per game (10.6) and Total Points Allowed (74). Of their first six games, 20 points is the highest number of points Ole Miss has allowed. That speaks volumes of this defense, especially in college football where offensive shootouts and high scores are common. What makes this defense so good is not just the starters, but the quality depth behind them.

Ole Miss and Mississippi State meet on the final game of the season on November 29 for their annual “Battle for the Golden Egg” game. If these two teams continue the way they are, this game will not only have serious implications on rankings but it will be one of the best games of the year. Stay tuned. 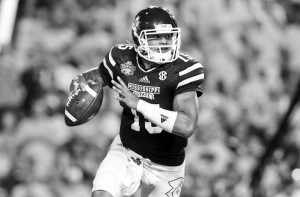