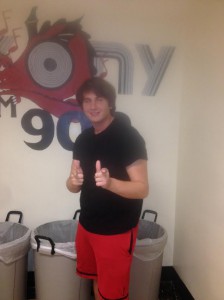 What is your DJ name?

When/at what times do you usually DJ for WONY?

How did you get involved with WONY?

I was in my econ class taught by our faculty advisor Mr. Ring. He was wearing a WONY shirt and talking about how great the club was, I thought joining the station would be a great a way to get my voice out there and to meet new people. I eventually went to the general interest meeting and after that I was sold I wanted to be a DJ at WONY.

How long have you been involved with WONY?

I have been involved in WONY for three semesters

What type of music do you usually play?

I play mostly jazz on my show. I really stick to rat pack music though, such as Frank Sinatra, Sammy Davis Jr. and Dean Martin.

Do you do anything unique or different during your segment on the show?

I feel playing jazz is what makes my show unique. In the station we currently have three DJs who play jazz and that’s including me. Since this is the case I think it’s my job to keep the genre alive in the station and make sure the classics are heard.

What are some of your favorite songs to feature/play as of late?

I play Frank Sinatra’s “New York, New York” at the end of all my shows. Like I said before, I usually stick to songs that the rat pack would sing. Sometimes I throw some Louis Prima and Micheal Buble into the mix.

Why should students tune into WONY during your segment?

I think it’s good to sit down and relax to jazz before the week starts since we all know how busy our schedules are. Students these days listen to top 40 music that really doesn’t consist of jazz and I think it’s important we don’t leave that genre in the dust. My show provides the nostalgic feeling that we all have forgotten about, I hope WONY’s future keeps that feeling going after I leave.