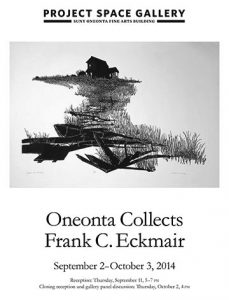 Why feature three artists from Detroit? That was the question posed Thursday, September 11 at the opening of the “3Detriot” exhibit located at the Martin-Mullen Art Gallery in Fine Arts. Why not feature three artists from Detroit is a better question.
The artists who appear in the exhibit include Linda Mendelson, Gilda Snowden and Andrew Krieger. Though completely different in style and vision, all three artists share a keen intellectual process, dominant color schemes and high-energy work that combines sophisticated technique with an urban edge. Another commonality is their Detroit upbringing, which has influenced their style and subject matter.
The fluidity and cohesiveness of the exhibit showcases the diversity among styles, in which each artist represents a different aspect of the Detroit art world. The show starts with Mendelson’s watercolor pieces, which incorporate bright splashes of color and abstract shapes. “Becoming and Gone” encompasses spiritual hope for the rebirth of Detroit through use of modern and classic techniques. The painting symbolizes new beginnings and hope for the poverty-stricken city.
Snowden, whose works were featured next, built upon Mendelson’s theme of resurgence, a motif throughout the show, and uses geometric figures and encaustic technique to highlight the “urban prairie initiative” in Detroit. Snowden aims to create a new view of Detroit through her featured series, “Flora Urbana.” Her work, “Garden,” is as beautiful as it is striking. The piece exemplifies her message of revival and finding beauty in unexpected places through a method that emotionally connects the viewer to Detroit’s cause. Snowden’s work encompasses the social change occurring in Detroit through the perspective of a native resident.
Krieger, the last artist featured, highlights the wave of Nuevo artists flocking to Detroit. As a recent professional artist, Krieger uses his past profession as a carpenter to enhance his work. His piece, “The Drink,” is enchanting. He explores perspective, size and shape in an attempt to alter the viewer’s sense of reality. “The Drink,” features concave relief sculptures that incorporate three-dimensional aspects and mixed media in an unusual but successful way. The work resembles that of a stop-motion film, with each individual box highlighting a different aspect, such as pan or close up. Krieger’s goal for the piece was to capture the viewers interest and attention by “setting up scenarios so [one] can feel a part of the work” and challenging the viewer’s sense of reality. The work perfectly embodies a sense of narrative and allows one to actively participate in the message of the piece just by viewing it.
Today, Detroit remains one of the poorest cities in America. Having filed for bankruptcy last March and with one–third of its population living below the poverty line, it’s a city in trouble; yet the artist initiative in the community is seeking to change that. The goal of Mendelson, Snowden and Krieger, as well as many artists in Detroit, is to revitalize the city and achieve economic opportunity, social equality and artistic expression. Hopefully, within time, Detroit will be revived by artistic innovation.