With the 2014 college football season already under way, it is time to look at the early season Heisman candidates.
Marcus Mariota, Quarterback, Oregon:

Despite not finishing in the top 10 of the Heisman vote in 2013, Marcus Mariota is primed to contend in 2014. Mariota played spectacularly in 2013 and has the stats to back it up. He threw for 3,665 yards, completing 63.5 percent of his passes and threw 31 touchdowns to a mere four interceptions. Even more impressive, Mariota rushed for 715 yards on just 96 carries and scored nine TDs. Going into his junior year, which is sure to be his last before declaring for the NFL draft, Mariota will try to show the NFL scouts what he can do. With an extremely talented Oregon team around him, Mariota could lead the Ducks to their first college football playoff title.

Jameis Winston took the college football world by storm last year on and off the field. Despite being a freshman Winston led Florida State to a BCS championship and took home the Heisman last year. His season was nothing short of amazing. Winston produced a stat line of 40-10 TD/INT rate, 4057 passing yards with a 67 percent completion percentage. Although he is favored to win the Heisman again in 2014, Winston had his share of offseason troubles. These troubles include shoplifting crab legs, alleged sexual assault, a BB gun incident in which 13 windows were broken and a complaint that Winston was stealing soda from a Burger King. These blemishes on his record could play a role when some voters cast their ballot for the Heisman, but if Winston plays like he did this past year he is a lock to at least make a case for a repeat.

If not for an injury that forced him to miss three games, Todd Gurley may have had some new hardware. After an injury-plagued and very unlucky 2013 season for the Georgia Bulldogs, Gurley is healthy and poised to make a run at the Heisman. Although he missed time, Gurley posted 989 yards on 165 carries with six yards per carry in 2013. Georgia’s favorable schedule will play a part in Gurley potentially taking home the Heisman in 2014. With QB Aaron Murray now in the NFL, Georgia will look to Gurley to carry the load on offense.

Bryce Petty, Quarterback, Baylor:
This past season was Baylor quarterback Bryce Petty’s best. It was also his first as a starter. Petty has lived in Robert Griffin III’s shadow for the past two seasons but in 2013 Petty showed that Baylor wouldn’t miss a beat. He tossed 32 TDs and only three INTs for 4200 yards, completing 62 percent of his passes. Petty led Baylor to arguably the school’s best season with 11 wins and their first Big-12 title. After finishing 7th in last years Heisman voting and with a season under his belt, look for Petty to fly up in this years voting.
Honorable Mentions: Ameer Abdullah (Running back, Nebraska),  Brett Hundley (Quarterback, UCLA,) TJ Yeldon (Running back, Alabama) 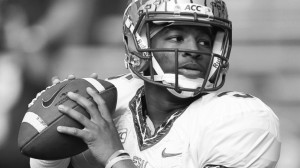