Prior to the 2013-14 season, the Brooklyn Nets signed NBA legend Jason Kidd as their head coach. Following the addition of Kidd, the Nets traded several draft picks and players for  veterans Paul Pierce, Kevin Garnett and Jason Terry. This major trade gave the Nets a prolific starting five, including Deron Williams and Joe Johnson in the back court.
Early cheers of the 2013 season quickly transformed to boos after the Nets started their season  10-21. The Nets had no cohesion as a unit and were playing sloppy basketball with frequent turnovers. They looked tired and not happy with the way the “new look” Nets were playing. To make matters worse, their leading scorer at the time and star center Brook Lopez went down for the season on December 20 with a torn tendon in his ankle.

Lopez’s injury turned out to be a blessing in disguise for the Nets. Kidd was forced to use his entire roster and give bench players more minutes, allowing him to have a better assessment of his team’s talents. Garnett went back to splitting time at center and forward as he did in Boston, but soon enough Garnett’s health was in question as well. This led to the rise of rookie Mason Plumlee, who became a strong part of the Nets’ success. Williams’ inconsistent health allowed Shaun Livingston  to have substantial time on the court too, giving the Nets the necessary depth for a winning formula.

In 2014, the Nets went 34-17. A big part of their dramatic turnaround was their ability to take care of the basketball, but more importantly, their poise on defense. With Garnett on the court, the Nets allowed just 31.8 points per game in the paint, as opposed to the 43.5 points they allowed with him out of the lineup. Throughout his entire career Garnett’s defensive prowess has been a force to be reckoned with. He is sure to be a vital factor this postseason.

Kidd’s rapid transition from player to coach started off rough but quickly smoothed out. As the team improved, Kidd’s laid back attitude allowed the players to play loose and excel at their positions with confidence. Now that the “new-look” Nets are the “new-attitude” Nets, it seems like they may be set to make a playoff run in Brooklyn.

At the beginning of the season, fans raved about the Nets’ starting five. But in the end, it was the improved play from the bench and their ability to play as a complete team that led to their success. Kidd’s coaching can’t go unnoticed as well, for the Nets went 4-0 against the Miami Heat this season. If the Nets want to advance far into the playoffs, it is likely that the Heat will be a team standing in their way. At this moment, the Nets are hot and fans in Brooklyn are ready for their team to make a run. 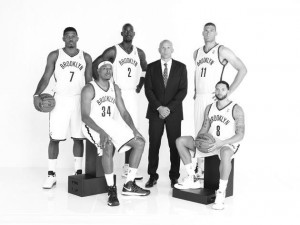