On April 7 the New Jersey Devils lost a 1-0 heartbreaker to the lowly Calgary Flames. With this result the New York Rangers officially clinched a playoff spot. The Rangers are matched up against the Philadelphia Flyers in what will be one of the most anticipated series of the opening round. These rival teams simply do not like each other and it has been shown throughout their meetings during fights, questionably late hits and constant trash talk between the benches.
While most fans give credit to the bigger names on the Rangers (Henrik Lundqvist, Rick Nash, Ryan McDonagh and Derek Stepan, just to name a few), it is still important to acknowledge some of the guys who play an important role but may not necessarily get his name on the score sheet.
Through his first 71, forward Dominic Moore only has 18 points (six goals, 12 assists) and is rarely one of the three stars of the game. He is always on the fourth line, resulting in less playing time when the Rangers are losing late in the third period.

During the last quarter of the season, however, Rangers Head Coach Alain Vigneault acknowledged that the fourth line of Moore, Brian Boyle and Derek Dorsett/Dan Carcillo has been their most consistent group. “They are simple and they compete. That fourth line is big, grinding, you know, wear-the-opposition type line, and when they find ways to contribute, like they have the last couple of games offensively, it makes our team that much better, as far as winning hockey games,” Vigneault said in a postgame interview.

Moore’s intangibles are what make him such a valuable commodity for the Blueshirts. He can play either wing or center and has the team’s best face-off percentage (.546), often being put out on the ice on the start of an important penalty kill to win the face-off and immediately get the puck out of the zone. When the Rangers clear the puck on a kill, Moore is always the first forward down the ice, putting pressure on the puck handler and forcing the opposition to make a dangerous pass, resulting in a turnover. During the regular season, the Rangers had a penalty kill success rate of 85 percent, which ranked fifth in the National Hockey League.

What is most impressive about Moore’s strong play is that this is his first season in the NHL since 2012. During the 2011-2012 season, Moore was playing for the San Jose Sharks. But in the final two games of the Sharks first round playoff series against the St. Louis Blues (which they lost in five games), Moore was out of the lineup. Some were wondering why Moore was not playing, but it was found that his wife, Katie, was diagnosed with a rare form of liver cancer.

As Moore took care of his wife, the NHL had its second lockout in a decade span, pushing the start of the season to mid-January. On January 7, 2013, his wife passed away. Instead of signing with a team, Moore spent the 2013 season raising money for the Katie Moore Foundation, which donates money to help treat rare forms of cancer.

After his return to the lineup this season, Moore was the New York Rangers’ nomination for the Bill Masterton Memorial Trophy, which is given to the player who best exemplifies the qualities of perseverance, sportsmanship and dedication to hockey. It has been an impressive comeback for Moore, but the Rangers have more work to do. 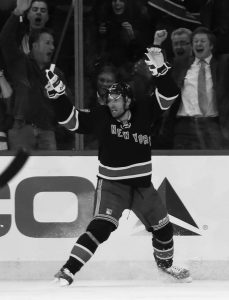