After months of cold, wind and snow in what feels like a never-ending winter, it is hard not to get a little moody or sad. Changes in mood and behavior are commonly felt among people during the winter months, but often people who experience changes in behavior are going through more than just a short-lived case of the “winter blues.”
Seasonal Affective Disorder (SAD),  commonly called seasonal depression, is a type of depression that occurs at one specific time each year and affects people who have otherwise normal mental health during the remainder of the year. For most people who suffer from SAD, symptoms appear during autumn and last throughout the winter, although some people experience SAD during the spring and summer. SAD was not formally named and recognized until 1984, when Neil Rosenthal and a team of scientists in New York studied the effects of seasonal changes on moods. Rosenthal, who was born and raised in South Africa, noticed changes in his own productivity and energy levels when he moved to the darker and colder climate of New York.
Symptoms of SAD mirror those of clinical depression. Just like a person with clinical depression, someone who suffers from SAD will likely experience long-lasting feelings of anxiety, hopelessness and sadness. He or she will also be likely to sleep more than usual, eat more (especially foods high in carbohydrates, which could explain how some people gain that extra “winter padding”), withdraw from friends and lose interest in once fun activities.
SAD affects about five percent of the population at severe levels, and another 10 to 20 percent of the population suffer from milder cases. Women are four times more likely to get SAD than men, and unsurprisingly people who live in colder climates are more likely to develop the condition (SAD is seven times more common in Washington than it is in Florida).
Besides being the first to officially acknowledge SAD, Rosenthal and his team were also pioneers in the use of light therapy as treatment for seasonal depression. Rosenthal found that patients who were treated with bright lights were able to more successfully manage their depression than they could without the bright lights. It is widely accepted that lack of sunlight is the reason behind seasonal depression, and light therapy has become a common treatment for symptoms. Doctor’s note that tanning beds are neither a safe nor effective way to combat SAD. Those who suffer from SAD might also be recommended to take vitamin D supplements.
The bright news is: winter is almost over. March is a temperamental month, and it wouldn’t shock many people to see a late snowstorm here in Upstate NY. But take advantage of rare sunny days—some fresh air and natural light could be all you need to refresh your body and refocus your mind. 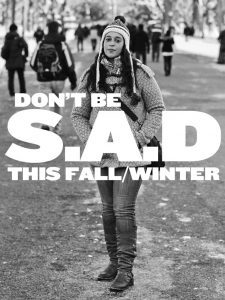