Over the last year or so, shows like Breaking Bad, The Walking Dead and House of Cards have enjoyed a loyal, vocal and widespread following. What do these shows have in common? They are available for immediate, cheap and convenient consumption by services like Netflix,  HBO GO, and Hulu.
As technology progresses, so does our “need” for immediacy. As a result, many people have chosen cheaper, more dynamic alternatives to cable television such as Netflix, Hulu+, Amazon Prime or Roku. It is a simple formula that seems to work across the board– you pay a relatively low fee, become a member, and anyone in your family can watch on one account, anywhere. This is especially appealing to busy people who want to watch on their phones or on the go, those who cannot afford traditional cable or television and college students who would love to be able to plug their headphones into a device of their choice and watch whatever they’d like, all without bothering a roommate or even getting up.
Many don’t want to bother with the restrictions cable provides. These restrictions include hefty prices, never-ending commercials and the indiscernible competition between Fios, Optimum, Time Warner Cable and DirecTV. Not to mention finicky connections during stormy weather.
As far as money is concerned, cable is not getting any cheaper. Recently, there have been small increases in Time Warner Cable and DirecTV in our area. Starting March 19, Time Warner Cable will charge an additional 6.4 percent to consumers who are not on their promotional plan. DirecTV also recently increased their prices 4.4 percent.
So, why don’t we all abandon cable as we know it, and rely on other Internet sources to provide our  entertainment? We want things instantly. Services like Netflix don’t come out with the new seasons of some shows until up to a year after they have aired on television. Therefore you can never truly catch up.
Also, people find comfort in television as it is. In a poor habit passed down from my mother and grandmother, I fall asleep to TV almost every night. Whether it was turning to comforting ESPN or Food Network, the teaser for the scary news, or watching each advertisement because they broke up the show nicely, television provided background noise. It was, and usually still is, my night light and security blanket. It holds and personifies charm and reliability.
Some major networks, namely CBS, are considering taking themselves off the air and offering their full range of entertainment for exclusively online consumption in exchange for a monthly fee. This is in reaction to a service called Aereo and its a service, available in limited areas, that offers the full live television experience, with no cables, DVR and a seamless experience throughout all devices. Aereo is doing this for free on their part on the basis that the airwaves are free for all. Major net-workers are suing Aereo because it is a “direct assault” on their businesses, and some states have already banned it. The concept of being able to watch cable, along with its full range of capabilities such as DVR and OnDemand on a number of devices including your television, phone or tablet is nothing new and is currently offered by Optimum. Until the Supreme Court has ruled about Aereo, it is unclear where the future of cable is going. With that being said, a number of options for entertainment consumption remain open to all. 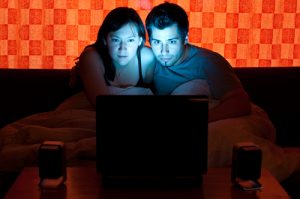