The 2014 NHL trade deadline has come and gone, but not without its fair share of big deals, unexpected moves and imminent trades. Multiple big names were moved this season: some to provide a fringe team that final push to the playoffs, others to solidify a weak spot on a strong roster. Here are the top three trades from this year’s trade deadline:

This was the biggest trade of the deadline. The Sabres dealt longtime goalie Ryan Miller and Captain Steve Ott to St. Louis in a move to build for the future. St. Louis, one of the top teams in the West, got even better. Miller is a big upgrade over Jaroslav Halak and will make this strong defensive team even tougher to score on. With Ott, the Blues got a versatile checking forward who can do a little bit of everything. For Buffalo, they add to their growing number of draft picks and have created a situation with great potential for future success. Almost immediately, Halak was traded yet again to Washington for goalie Michael Neuvirth and defenseman Rostislav Klesla. This move made sense since Halak would be a free agent at the end of the season. Its all about the future right now in Buffalo and while the present is grim, the coming years look bright.

Thomas Vanek was on the move again, playing for his third team this season after being traded from Buffalo to Long Island. His expiring contract and rejection of a long term deal was the primary motivation for the Islanders to trade him. What they got in return was underwhelming to most Isles fans. While Collberg is a promising prospect, many expected a bigger return for a talented player like Vanek, but again his contract hurt New York. The Canadiens are all but locked in a playoff spot in the East and are looking to bring a Stanley Cup to Montreal. They increased those odds by acquiring Vanek. Despite possibly ending up being a partial-season rental, Vanek and his scoring abilities will pay dividends for Montreal. However, if Vanek is offered a contract, he may stay with the successful Canadiens franchise.

In a swap of captains, the Rangers and Lightning traded two franchise players in Ryan Callahan and Martin St. Louis, respectively. St. Louis has been with the Lightning since 2000, helping the team win a Stanley Cup in 2004. Callahan has spent the past eight years with the Rangers and became a fan favorite. His willingness to do whatever it takes to win and his leadership made “Captain Cally” a popular figure in New York. In this trade the Rangers acquired a prolific scorer. Even at 37, St. Louis still scores at will, ranking 5th in the NHL in goals. The Lightning acquired a good two-way player with grit and two prime draft picks.
Both teams will suffer in some categories, Callahan is not the goal scorer that St. Louis is and Tampa Bay will hurt because of it. While the Rangers get a boost in the offensive department, they lose out on the intangibles that Callahan brought to the table as well as two high draft picks. Overall, in the short-term the Rangers win this deal because they got rid of Callahan’s expiring deal and got a great player in return. Yet, St. Louis is 37, nearing the end of his career. In the long-term, Tampa Bay wins this deal.
Winner: Tampa Bay 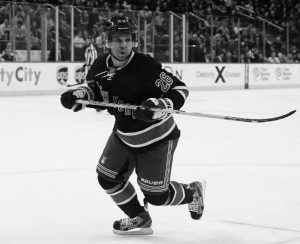