With three of the “Core Four” and faces of the franchise for nearly two decades now gone, with their former superstar second baseman off in Seattle and approximately $486 million in new acquisitions, the New York Yankees enter this season with a slew of question marks. To add to the story lines of a revamped lineup, replacing Mariano Rivera and Robinson Cano, along with a pitching staff riddled with uncertainty, this also happens to be Derek Jeter’s final season.

After an 85 win 2013 season, which for most teams would be considered a success when you factor in the injuries to significant contributors like Jeter and Mark Teixeira, there is a lot of pressure from the Bronx faithful; after all this is the New York Yankees. So what is the outlook for this year’s squad?

Their strength is in the outfield with their four to five man rotation of Jacoby Ellsbury, Carlos Beltran,  Brett Gardner, Alfonso Soriano and Ichiro. Gardner and Ellsbury will improve the outfield defensively along with causing havoc on the base paths. Their outfield has a nice balance of speed and power that will surely be one of the best in the MLB.

As for the rest of the lineup, people seem to believe that a now healthy Jeter and Teixeira will be diminished; but this may not be true. This is Jeter’s last season and he will  attempt to end his storybook career on a high note. The last time people wrote him off, Jeter bounced back with a .312 batting average and a league leading 216 hits. Teixeira will sure up the right side of the infield defensively and after a full year of mental and physical rest, he should bounce back at the plate. Pencil in Brian McCann and his dead pull swing for 25-30 homers and the lineup will be back towards the top of the MLB.

Unfortunately for the Yankees, the bullpen which was their greatest asset last year, is now one of their glaring weaknesses. They won 85 games as a result of a bullpen that kept every game close up until the last few weeks of the season. With the losses of lefty specialist Boone Logan and Rivera, as well as a lack of top quality acquisitions, Manager Joe Girardi will be relying heavily on young and inexperienced arms to get the team through the season. As of right now, the bullpen has a wait-and-see approach as to how things will go without the greatest closer of all time.

As for the pitching staff, it is filled with uncertainties.The biggest questions are: how will CC Sabathia bounce back after a horrible 2013 campaign, how will Masahiro Tanaka fair in the MLB, and after collapsing down the stretch, can a 39 year old  Hiroki Kuroda hold up for an entire season? These are some legitimate concerns.
However, Sabathia has dropped a sizable amount of weight and looks poised for a bounce back season. Thus far, Tanaka looks like he will be able to handle the New York spotlight, something Kei Igawa and Hideki Irabu failed at, and if he is anything close to what the scouts claim he is, Tanaka will have a solid season. Don’t forget about Ivan Nova who made ESPN Grantland’s list of potential 2014 breakout performers as well as Michael Pineda, who prior to his injury was regarded as a top young starter.

After missing the playoffs for only the second time in the last 17 years, the Yankees nixed the $189 million self-imposed salary cap and were extremely aggressive in free agency. The last time there was some uncertainty (after the 2008 season), General Manager Brian Cashman went out and spent a lot of money and the team won the World Series the very next year. They may not be a World Series favorite, but look for the Yankees to surprise some of their doubters and at the very least make the playoffs. 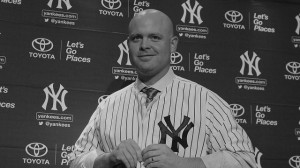