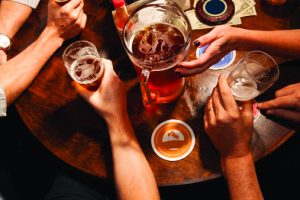 On July 23, 1984 the federal drinking age was officially changed from 18 to 21. Since then, many have been opposed to this federal law, claiming that it should once again be changed In a 2008 interview, before he took office as president , Barrack Obama was asked if he would lower the drinking age and he replied in the negative. It seems hope was lost again for youngsters around America, but according to recent studies, the legal drinking age has actually done exactly what it was intended to do.
According to the Huffington Post, the legal drinking age of 21 has saved many
lives on the road  and has protected young adults from dangerous drinking. Researchers in 2006 found that higher drinking age is closely linked to lower rates of drunk-driving deaths among young people. Researchers also discovered that current drinking restrictions have not resulted in binge drinking among teens, as some have suggested. States within the United States differ on the details of the laws regarding alcohol possession and adult supervision of drinking at home, but all of the US  has kept the minimum drinking age of 21 since at least 1988. Advocates for lowering the legal drinking age argue that the law has not stopped teenagers from drinking. They say that it makes teens binge drink behind closed doors and in places with no adult supervision.
Those who support the drinking age argue that the laws now have led to fewer traffic accidents caused by drinking.
The drinking age has saved up to 900 young lives yearly on the road according to the National Highway Transportation Safety Administration whether this refers to those who are drunk drivers, or those who are affected by drunk drivers.
Teen drinking and driving rates have decreased   by      54        percent over  the last two
decades. Many studies have found that a higher legal drinking age led to less alcohol consumption. In one of the most recent studies, researchers found that in 2011, 36 percent of college students said they’d engaged in binge drinking in the past two weeks, compared with 43 percent of students in 1988, the first year that the age 21 law was adopted by all of the US
Researchers discovered the increased drinking age has positive effects despite many disobeying the law. Instead of lowering the drinking age, many researchers and advocates say that there should be greater enforcement of the law. “Clinical trials have found that when college towns put more effort into enforcing the law — and advertise that fact to students—student drinking declines,” Boston University researcher, William DeJong concluded in a Huffington Post article.
The next time you grumble about not being able to get into the bars or buy alcohol at your local liquor store, just remember there is reason behind it. “Some people assume that students are so hell-bent on drinking, nothing can stop them,” DeJong said.