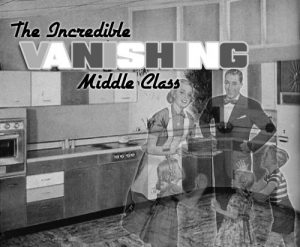 The middle class has long been the backbone of American society. It’s where the majority of voters reside and has been epitomized as the American dream. However, as the long-term effects of the bailouts and policies that prevented a devastating economic collapse during the “Great Recession” become more apparent, the future of the American middle class appears uncertain.

Although the economy has grown since 2008, the majority of that growth has been a result of increased spending by the upper crust. On the surface, the economy seems to be making a slow recovery but when you look deeper, it’s clear that the majority of economic growth is in the wealthier sectors. Upscale restaurants and hotels have seen large gains whereas businesses that target the middle class, such as Olive Garden and Best Western, have remained stagnant or have reported losses. Low-wage industries have also seen growth since the beginning of the recovery.

With the effects of the recession still taking their toll on the mid-wage industries, many have been forced to lay off employees and shrink the size of their businesses. As a result, the amount of mid-wage jobs has yet to fully recover from the losses of the recession. Meanwhile, both high and low-wage jobs have fully recovered. In fact, the number of low-wage jobs has more than doubled.
The shrinking unemployment rate would seem to foreshadow good things for the economy, but most of the gains have been in low-wage sectors. People who previously would have been able to find work in the mid-wage sectors are being forced to take low-wage jobs in order to pay the bills and make ends meet. As this trend continues, the rift between the rich and the poor in the United States is growing faster and faster.

While the middle class has been shrinking and struggling to recover from the recession, prices for goods and services have continued to rise, putting more pressure on the middle. As gas prices, tuition and the cost of living continue to rise, the middle class is left with bills they can’t pay and are forced further into debt. According to CNNMoney, 76 percent of Americans are living paycheck to paycheck. With people struggling just to find work, the rising prices of goods and services are putting a huge strain on a group that is already struggling to stay afloat.

A loss of jobs, increasing prices for goods and services, and an economy that has yet to fully recover from the recession are contributing to the shrinking of the middle class. If current trends persist, the middle class will continue to shrink, leaving a widening gap between the rich and the poor. Although the economy is technically making a recovery, one of the most important pieces of American society is continuing to shrink as a result of the recession and a recovery plan focused on bailing out failed businesses rather than fixing the problems that were the cause of their failure.