Widely regarded as the easiest winter Olympic sport to play and most the boring to watch, curling is an event that almost no one understands. Part of its charm is its lack of popularity along with just how easy it looks. Curling seems funny and bizarre as the athletes use brooms to propel large rocks down the ice toward a bull’s-eye target. Watching the precision and intense concentration of people essentially playing an advanced version of shuffleboard is quite entertaining.

The Olympics are supposed to be about pushing the limits of athletics and viewers tune in to watch high flying, death defying stunts, such as snowboarding and ski-jumping. Curling is the simple man’s sport. It is something that you and I watch and come away believing we can do; and truth be told we probably can.

This is no knock on professional curlers. I have the upmost respect for them, however, their sport has become somewhat of a punch line. The competition became oddly popular during the 2010 Winter Games, when shows such as “The Colbert Report” and “Conan” shed light on the sport through comedy skits. Even the teams in 2010 capitalized on their sport’s goofy charm. Team USA began a fundraising campaign to sell “Hurry Hard” condoms, named for a common curling phrase shouted at the people who use the brooms (sweepers) to “hurry hard,” or hustle down the ice.

So when you tune-in in the coming weeks, look out for the favorite and two time defending champion Swedish women’s team as they look for the ever elusive three-peat.

Every four years when the Winter Olympics start up again, many viewers are glued to their seats, watching events that they don’t usually get to see. Whether it is  luge or bobsledding, the fans are interested. One event that especially captures the audience’s attention is curling.
The point of curling is to get your “rocks” as close to the circular target on the ice as possible. There are ten “ends.” The team with the highest score at the end of ten ends is the winner.

Some people may mock curling because you don’t need to be the most athletic person to compete. But for what it seems to lack in strength of body, it makes up for what is required mentally. It is widely referred to as “chess on ice.” While one player slides the stone along the ice surface, the  rest of the players use brooms to brush the ice in order to have the stone stop in the desired spot.

But there is more strategy than that involved. A team will try to place the stone in a spot in order to block the opponents from getting close to the center.

If a person gives curling a chance, they may become interested in the concentration by all of the players involved. Before the viewer knows it, the game is on the tenth end and the match is still up for grabs. The pressure is mounting and just like any other sport, either a hero or a goat will emerge.

Whoever wins gold will be rewarded for four years of hard work. They will proudly get to sing their national anthem as their country’s flag raises. 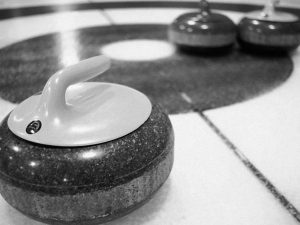