Although here in Oneonta it may not feel like it, winter is actually about 24 days shorter than it has been in recent history. Studies by the European Space Agency (ESA) show that Arctic lakes are freezing later and thawing earlier in the year, resulting in a less intense and shorter winter season. The lakes are not only frozen for a shorter perio 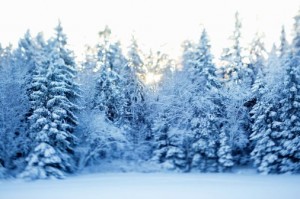 d of time, they are “not as frozen as they have been in the past. For example, the frozen Arctic lake was about 38 centimeters less thick in 2011 than it was in 1950. The ESA provided radar imagery that showed that from 1992 to 2011, there were 22 percent fewer lakes that became “grounded ice,” (or in other words  froze all the way to the bottom of the ground). Spring arrives approximately 10-14 days earlier than it did just 20 years ago.Although this may sound good to summer-loving folk, it’s not all good. For example, gross pests, such as ticks (that carry lyme disease) are no longer being kept in-check by the winter. This causes problems for animals as well as people in early spring. The pine bark beetle is another example of a pest that is no longer being kept in-check. They have been spreading across the Western United States, wreaking havoc on forests.
These shorter winters are also bad for the economy, as it disrupts business for many companies. For example, ski resorts have not been doing as well, and places that sell winter equipment (i.e. snowboards, skis, ice-skates, snow pants, sleds, etc.) do not have as big a window as they did in previous years to sell their merchandise. So although the groundhog’s shadow was seen, signifying six more weeks of winter, know that it is still a shorter winter than previous years.