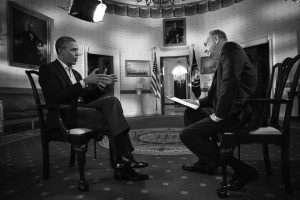 FOX News host and political commentator, Bill O’ Reilly, sat down with President Barack Obama for an exclusive interview right before the Super Bowl last week. To the untrained eye, the interview could have been mistaken for a sparring match, considering it’s no secret that both men have very different views on just about everything. O’Reilly hammered Obama with tough questions throughout the talk and demanded straight answers. Obama handled himself well, not getting flustered by O’Reilly’s questions, which seemed designed for future use in FOX News sound-bytes.

O’Reilly wasted no time getting straight to the point with his interrogation. His first question was concerning the glitches involved with the Affordable Care Act, also known as Obamacare. As Obama danced around the question, O’Reilly asked why he did not fire the person in charge of the Affordable Care website. When Obama would not give O’Reilly what he felt was a straight answer, O’Reilly demanded one. During the interview O‘Reilly told Obama that he had made a mistake by telling US citizens that they would still be able to keep their old insurance. Obama replied “Bill, you have a long list of mistakes I made in my presidency.”

After the two discussed Obamacare they went on to talk about the IRS scandal and Benghazi. While they were discussing the IRS scandal, O’Reilly accused Obama’s team of not wanting to release information because it would make them look bad. Obama denied this accusation, stating that no one on his team ever said they were withholding information from the American people. Obama also told O’Reilly “These kinds of things keep on surfacing, in part because you and your TV station will promote them.”
FOX News has a reputation for promoting conservative political positions despite its “Fair and Balanced” slogan. They have been accused on more than one occasion of slanted reporting, with some going as far as calling the news station a “right-wing propaganda machine.” CNN’s Larry King said in an interview with the Chicago Sun-Times, “They’re a Republican brand, they’re an extension of the Republican Party with some exceptions.” FOX News has publicly denied this, saying their reporters remain neutral.

By the end of the interview there was nothing left unsaid. It left viewers wondering why Obama would even agree to take part in the interview. The second term president doesn’t have much to lose at this point in his presidency since he is not going to be running for office again. Many viewers thought that O’Reilly was too hard on Obama. He repeatedly interrupted the president and shook his head in disagreement throughout the interview. Yet some think that O’Reilly was not hard enough. The only thing that you could have possibly taken away from this interview, other than an awkward vibe, is that partisanship is stronger than ever before.