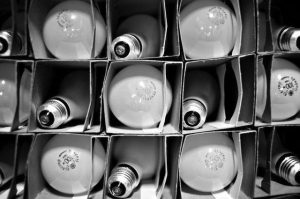 The New Year began with the classic “out with the old and in with the new,” as the start of 2014 brought with it a federal ban on something we all have and use—light bulbs.
The ban, which took place on the first of the year, prohibits the manufacturing and importing of 60-watt and 40-watt light bulbs. These are the two most popular types of light bulbs in the country, mainly for the soft, warm glow they emit as compared to the harshness of an LED light. The 60 and 40-watt bulbs join 75 and 100-watt bulbs, two types that were banned in 2013.

Some are upset over the ban, saying that Obama’s administration has overstepped its boundaries by coming into homes and deciding what light bulbs can and cannot be used. But this ban has less to do with the current administration than some would like to admit. The ban dates back to 2007, when President Bush signed rules into law to reduce inefficiencies with old bulbs. Yet people continue to complain, arguing that they should be able to choose the bulb of their choice without the help of the government.

The ban was designed to address inefficiencies of the traditional incandescent bulb, which converted only 10 percent of the energy it used to produce light—the rest of the energy was wasted. New bulbs use and waste less energy; a 40-watt LED bulb, for example, uses 85 percent less energy than a traditional incandescent bulb. And although these new bulbs may cost more (sometimes up to 10 times more) they last close to twice as long. According to experts, the increase in cost of the bulb will be paid off within two years because the bulbs use less energy. And because the bulbs last up to 20 years, savings will continue to stack up over time. However, some are still waiting to see the benefits of florescent bulbs. Oneonta alum Brent Drapeau offered his thoughts, saying “I haven’t had good experiences with florescent. They burn out on me and just cost more.”

Stores are allowed to sell whatever remains on their shelves of the now prohibited product, but won’t be able to purchase any more of America’s favorite light bulb. Manufacturers have stopped producing the old bulbs and are on to making more efficient options.
Consumers can now expect to see halogen incandescent, compact fluorescent and LED bulbs lining the shelves of hardware stores. These bulbs are essentially the same, but are more efficient because of a filament wrapped in gas. Manufacturers are developing products that aim to please the buyer, combining burning efficiency with a glow that is nearly identical to old bulbs. Consumers are concerned, however, by the amount of mercury that compact fluorescent lights (CFLs) contain. Despite there being a very small amount of mercury within each bulb, the risk of light bulbs breaking on their way to the dumpster runs high. This could potentially pollute the soil or create health hazards for those who work on making or disposing the bulbs. Although some states and cities have mandated that CFLs be recycled and treated before ending up in a landfill, many citizens still throw away CFLs in the trash.
When asked if the benefits of energy efficiency outweigh the potentially harmful effects of mercury in fluorescent bulbs, Oneonta student Weston Honicker replied “We don’t have to choose between energy efficiency and the toxic effects of mercury. The use of both dimmers and simple light-conservation more than offset the higher kilowatt-hour cost of incandescents. The life-cycle cost of fluorescent production and disposal is also higher than that of incandescents.” He added that “It’s problematic when the only choice available is more dangerous than the previous choice.” When asked if he planned to stock up, Honicker replied “Hell yes.” Such a small change has already created an uproar among Americans, but whether or not the bulbs eventually satisfy consumers remains to be seen.