Tyriq Bultler, Staff Writer
Fans all over the country waited with anticipation for two weeks after the Conference Championship round wrapped up on Sunday, January 19. Peyton Manning, who was surgical in a win against his rival, Tom Brady, was on pace to solidify his legacy in his third Super Bowl appearance. After the best regular season ever by a quarterback, Manning would have to overcome the Seattle Seahawks in order to capture title number two.

It’s not often that fans witness the two best teams clash in the final game of the NFL season – and it’s more rare that fans get to watch the best rated offense in the league battle the top rated defense. But as the NFL would have it, spectators braced themselves for what was deemed to be an epic battle. If you’re a sports fan, you were ready as the Seahawks and Broncos were prepared to fight for supremacy.

If you were expecting a close game capped off by a late winning drive by either of the teams, then you were sadly disappointed. In what  may have been one of the most  anticipated Super Bowls in recent memory, the Broncos embarrassed themselves and lost 43-8. Seattle brought their “12th man” to MetLife Stadium. It was extremely loud, and the Broncos never had a chance.

When Manning and the Broncos fumbled their first snap from scrimmage, fans should have known what was in store on what turned out to be a beautiful night in New Jersey. Seattle dominated from the start and capped off an amazing season.

Manning came into the season in “2012 Lebron James mode” as he looked to erase the prior postseason failures and finally eradicate all the doubt from the minds of critics. He broke the record for touchdowns thrown in a season with 55 and passing yards thrown with 5,477. But this only meant that he had to win another Super Bowl. After three neck surgeries and two 13-3 Denver seasons, critics are still pointing to Manning’s inability to capture postseason success. He entered this year’s playoffs with a mediocre 9-11  playoff record, including eight first-round eliminations. After defeating the Chargers and Patriots and reaching .500, he was poised to eclipse immortality. But when that didn’t happen, it left the fans wondering: Did Peyton Manning choke?

It’s difficult to argue that someone choked after breaking the record for pass completions Super Bowl. Manning went 34-49 for 280 yards and one touchdown. He did throw two interceptions, including one pick-six. But the fact of the matter is Seattle played better.

All season long, Seattle prided themselves on defense. They played extremely well and held one of the best offenses in NFL history to zero points until the very last play of the third quarter.
Denver averaged 457.3 yards a game during the regular season. Seattle was able to hold this prolific offense to just 306 yards. Manning did make a few mistakes, but watching this game, fans just saw that the Seahawks were the better team on that night. Defensively they were explosive, and forced Manning into tough throws all night. He still managed to complete most of them, but the Denver offense was neutralized.
Bottom line, Manning is still one of three best quarterback’s of all-time.

He may not have delivered in Super Bowl XLVIII, but there’s no question he’s elite. His career was in jeopardy after his injuries. He was told he would never be able to play again. Now he’s breaking records and toying with opposing defenses.
Denver will come back strong next year, and Seattle will continue to be formidable. Who knows– maybe they will meet again and give us the heavyweight battle we were robbed of. 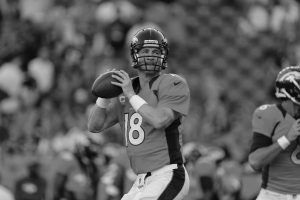