This week, New York City is buzzing louder than usual and it is because the biggest names in American fashion are debuting their collections for the fall 2014 season. I understand your confusion, it isn’t even spring yet, but in the fashion industry we must always look ahead. It began Thursday, February 6 and will continue until Thursday February 13 with multiple shows each day either at Lincoln Center or various other places all over the city.
Designer Alexander Wang shocked all who were invited to his  show, (fashion editors, bloggers, etc.) when he announced his show would be in Brooklyn this season because most aren’t apt to leave Manhattan in the realm of high fashion. It seems it may have been well worth the travel, his collection was the powerful, modern and always New York clothing we’ve come to know and love from Alexander Wang. It included tall over the knee boots, black and grey boxy coats and sweaters with bright accent colors. The shocking finale pieces were what truly brought the collection together. The clothing was made with heat activated leather and changed from black to various colored prints when the heaters turned on, resulting in an astounding and unforgettable stage presentation.
Project Runway Season Four winner, Christian Siriano has continued to make a name for himself in the fashion industry as an evening wear designer; he showed his new collection on Saturday. It was inspired by Lisa Fonssagrives-Penn, Swedish fashion super model from the mid-1900s. His collection was full of glamorous jewel toned dresses and gowns with 1950s hourglass silhouettes as well as large fur coats, and a gorgeous jacket-top-pant combo in a black and white checkerboard print. This is by far one of Christian Siriano’s best collections of his career. Scheduling for Fashion Week     usually places the bigger brand runway shows at the end of the week and the smaller, younger brands early in the week. The young label Creatures of the Wind, founded in 2007, made a strong statement on Thursday with a collection high in luxury. It included over-sized coats and robes paired with soft flowing skirts, loose pants and tops influenced by the easiness of Eastern dress. There was definitely a sense of relaxed ease to wearing these clothes and was a step in the right direction for their brand. Another brand that showed on Friday was Rag & Bone who have been producing clothes since 2002. This collection was clearly nostalgic of the 1990s with paint splattered denim, Bill Cosby sweaters and lumberjack check print. This brand doesn’t need a theme for their collection because they just know how to make great clothes that everyone will want to wear.
This is just a small taste of the action of NYC this week and will continue for another few weeks in various major cities. London is next, then Milan and Paris, who will each have their own fashion week. It is as though this is the Olympics for the fashion world, but lucky for us it occurs twice a year. 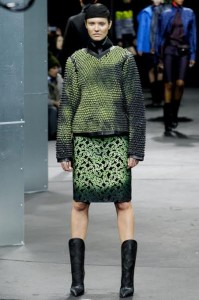 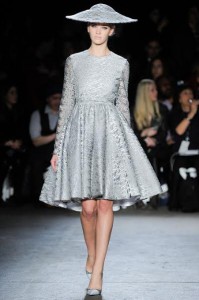 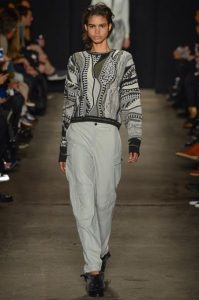 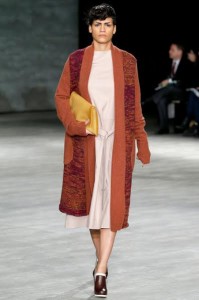