Signing players out of Japan has always been a risk for Major League Baseball teams. On one hand you could end up with the league leader in strikeouts with a Yu Darvish, or you could end up with a career minor leaguer in Kei Igawa. But after missing the playoffs and watching their hated rivals win a World Series, the New York Yankees really need to take some risks to prevent that from happening again.
By not re-signing Robinson Cano and being freed from Alex Rodriguez’s contract for a year, General Manager Brian Cashman has been able to spend freely. After spending millions on free agents such as Brian McCann and Carlos Beltran, the starting pitching still remained a major hole for them. The Yankee’s starting rotation was made up of a mediocre CC Sabathia, an aging Hiroki Kuroda, an unproven Ivan Nova, and few possibilities for the fourth and fifth spots. That’s where Masahiro Tanaka comes into play. The Japanese starter went 24-0 with an earned run average under 1.30 last season with the Tohoku Rakuten Golden Eagles.

Signing a pitcher of his caliber may seem like a no brainer, but with the recent issues that have plagued many Japanese pitchers in the majors, some teams were hesitant. Also signing any player to a seven year contract worth over 155 million dollars has to worry many general managers. But Tanaka brings something that the Yankees desperately need, youth.

The average age of the Yankees is over 30, a model that can’t possibly be maintained for a successful franchise. Tanaka is 24 and has what looks like a great career ahead of him. For the majority of players in the Yankee’s lineup their best years are behind them. Tanaka is just what the Yankees need, a young starting pitcher with the potential to be an ace. Signing a pitcher who has never faced a major league batter to a deal of this magnitude is clearly a risk, but with no risk there’s no reward. 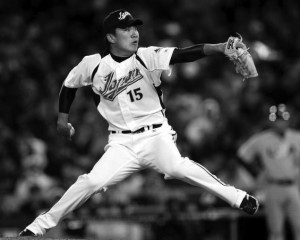