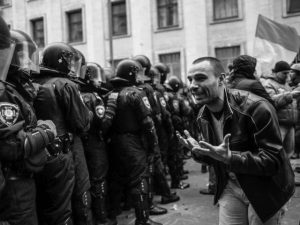 More than two months after fiery protests erupted in Kiev, unrest continues in Ukraine. Demonstrations erupted in response to President Viktor Yanukovych’s refusal to sign an agreement with the European Union that would open new economic and political doors for Ukraine. Yanukovych chose instead to sign an agreement with Russia, which would provide Ukraine with $15 billion in loans and a discount on the purchase of natural gas. Ukraine has been independent from Russia since the fall of the Soviet Union in 1991 but the two countries remain politically and economically intertwined. However, soon after protests began, demonstrations became less about the deal with Russia and more about removing Yanukovych from office, as many Ukrainian citizens blame him for the economic decline and corruption in the country.
Since November, protests have spread from Kiev to other cities within Ukraine, bringing violence close to home for millions of Ukraine citizens. Photos of the demonstrations have shocked the world, with images showing bloodied protestors at the mercy of riot police and entire streets that seem to be ablaze. A confirmed six people have died in these riots and many are injured, with dozens of others being reported missing. People have been brutally beaten and protestors are screaming of torture tactics being used on demonstrators.

Yanukovych’s office recently passed new anti-protest laws which are aimed at the current demonstrations. The law bans protests from taking place without the government’s permission and threatens those who disobey with up to ten years of imprisonment. In response to the continuing violence, Obama has announced plans for financial sanctions that could be forced upon protest leaders and Ukrainian officials. These financial sanctions are only in the early stages of being discussed, but President Obama is responding to the violence as well as the Ukrainian government’s attempt to silence its people.

Yanukovych just came back after taking nearly a week of sick leave, claiming to have a high fever and respiratory problems. Anti-government protestors accused him of taking this leave as part of a bargaining tactic, but some thought that this could be a sign of his plans to step down. However, upon his recent return, it became obvious that Yanukovych has no plans of moving aside, and unless the opposition gives in, protests will continue indefinitely.