The 2014 Winter Olympics are set to begin February 6 and the United States men’s hockey team is ready for revenge. After coming up just short in the 2010 Vancouver games, losing 3-2 in the gold medal match against Canada, anything less than a championship will be considered a failure. This is one of, if not the best, teams the Americans have fielded and they are ready to go to Sochi to bring back some hardware.
While they might not  be a team full of superstars (like Canada), the United States has one of the deepest rosters in the tournament. In goal, they will pick from the trio of Ryan Miller (Buffalo Sabres), Jonathan Quick (Los Angeles Kings) and Jimmy Howard (Detroit Red Wings). It has not been officially announced who will be the starter, but it is going to come down to Miller or Quick. Miller has had previous experience in the Olympics, being named tournament MVP of the 2010 Vancouver Games while playing for the losing side. But in the past few seasons Quick has been one of the best goalies in the league, winning a Stanley Cup in 2012 and being given the Conn Smythe Trophy as MVP of the playoffs. You can’t go wrong with either pick, but based on recent play Quick is likely to get the nod.

The defense may not be talked about as much as the goaltending, but it is still solid. Ryan Suter (Nashville Predators) and Ryan McDonagh (New York Rangers) will be the defensive leaders, going up against the first line of their opponents and asked to play important minutes on the penalty kill. The rest of the defense has a nice mixture of youth and experience.  Brooks Orpik and Paul Martin (both Pittsburgh Penguins) were both named to the 2010 roster, but Martin could not play due to an injury. While McDonagh, John Carlson (Washington Capitals) and Justin Faulk (Carolina Hurricanes) are under the age of 25, they will still be an integral part of the team. Carlson and Faulk will be used on the power play, just as they are used in the NHL.

On offense, the US has both skill and leadership. Phil Kessel (Toronto Maple Leafs), Patrick Kane (Chicago Blackhawks), Joe Pavelski (San Jose Sharks) and Zach Parise (Minnesota Wild) can all create their own space and light the lamp from anywhere in the offensive zone.

Also on offense, they have three players who captain their NHL team. Dustin Brown (Los Angeles Kings), David Backes (St. Louis Blues) and Ryan Callahan (New York Rangers) each wear the “C” on their NHL jerseys, showing that they are leaders. This is a big plus, since the Olympics are a pressure filled tournament. These players have proven that they can keep their composure. Brown, Callahan and Backes are able to help out in any situation. All three players have scored over 20 goals multiple times in their career and are known to kill penalties, putting their bodies on the line to block shots. On January 31, Parise was named captain of team USA, with Brown and Suter  being named  as alternates.

One of the biggest questions with this team is who was left off the roster. Forwards Bobby Ryan (Ottawa Senators) and Kyle Okposo (New York Islanders) are two players who can be real difference makers. Ryan has 40 points (19 goals, 21 assists) through the first 53 games of the season, while Okposo has 57 points ( 23 goals, 34 assists) through his first 55 games.  During the last few months, Okposo has arguably been the best player in the NHL.

There were a couple of big names left off of the defense as well. Jack Johnson (Columbus Blue Jackets) and Erik Johnson (Colorado Avalanche) were both on the 2010 Olympic team and are well-known for shutting opponents down. It won’t be known until after the games to see if their experience will be missed.

If the United States wants to knock off the giants from up north, all of the players on their roster will need to be at their best. There is no denying the talent on this team, but they will have to showcase it. 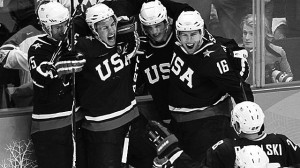