A common way to make an NFL team better is to sign players through free agency. While it is more expensive and risky than drafting a rookie, a good signing can be a team’s difference between missing the playoffs and winning a championship.
Jimmy Graham, TE, New Orleans Saints: Graham is the most valuable free agent coming into the offseason. However, he may not even reach the free agency period. It is rare to see a franchise let a talent like him get into the open market. Graham caught 86 passes and 16 touchdown’s in the past season. If the Saints do not reach a long-term deal with Graham, New Orleans will have no choice but to put the franchise tag on him. Although, this would prove costly for a team already $12 million over the 2014 salary cap. Graham has said that he is “not keen” on the franchise tag, despite this, it is unlikely Graham will leave New Orleans.
Potential Landing Spots: N.O.

Alterraun Verner, CB,
Tennessee Titans: Verner has been a top corner in the NFL for a few years. He covers receivers  well, has played in every game in his career (64), and is coming into his prime at age 25. This past season Verner posted 57 tackles, five interceptions and 23 passes defended. He has been a major part of improving Tennessee’s defense and would be irreplaceable if lost in free agency. He could still sign with the Titans,but will want more money. Another team that could pry Verner away is the Minnesota Vikings. Minnesota has a lot of cap space and have Jerry Gray on staff, a coach Verner is familiar with. If he does not return to Tennessee, Minnesota is the next best bet.
Potential Landing Spots: TEN, MIN, WSH

Alex Mack, C, Cleveland Browns: Mack has been one of the best centers in the league since 2009 and has started all 80 games of his career. He has been one of the rocks of Cleveland’s offensive line and is just 28 years old. He will be a hot commodity and is expected to test the market, but has said that he will give Cleveland the chance to match a team’s offer. Teams that will be interested in his services include: Jacksonville, Chicago and the New York Giants. The most interesting team is Jacksonville, who are in need of a center after longtime stalwart Brad Meester retired this past season, and the Jaguars have over $54 million in cap space. Mack has stated that he would like to stay in Cleveland but if a team like Chicago were to offer him a deal, that may change.
Potential Landing Spots: CLE, JAC, CHI, NYG

Brian Orakpo, OLB, Washington Redskins: Orakpo returned from  an injury this season after he missed almost all of the 2012-2013 campaign. His return brought 60 tackles and 10 sacks but, despite this, the Redskins defense was awful. Nothing went right for Washington this past year, especially with all of the RG3 and Mike Shanahan drama. These factors may influence Orakpo to jump ship for a new team, and he will certainly draw strong interest from numerous suitors. Teams that could pay Orakpo the contract he will be looking for include: Oakland, Philadelphia, Green Bay, Indianapolis or Washington. Oakland has a lot of money to spend and desperately needs a pass-rushing linebacker. Philadelphia signed OLB Connor Barwin last offseason which proved to be a fruitful investment, but pair him with Orakpo and Philly has the pass rush they’ve been looking for. Green Bay could sign Orakpo to complement Clay Matthews or Washington could re-sign Orakpo since he is most likely their number one priority.
Possible Landing Spots: GB, WSH, OAK, PHI, IND

Lamarr Houston, DE, Oakland Raiders: Houston was Oakland’s best defensive player this past season, posting an impressive 69 tackles and six sacks. Houston has been invaluable to the Raider defense and shown he can play both end and defensive tackle with his 6’3” 300 lbs. frame. He is only 26 and with some help, his numbers could improve. Oakland has the most cap space in the NFL and have Houston as a top priority, but General Manager Reggie Mckenzie has shown that he is not willing to overpay for players (see Phillip Wheeler and Desmond Bryant). However, its hard to see Oakland let a guy with Houston’s talents walk away. If he does not return to Oakland, Houston could go to a team like Green Bay, Minnesota (who is most likely losing Jared Allen in free agency), or Miami who may lose some of its starting front seven.
Potential Landing Spots: OAK, MIN, G.B., MIA 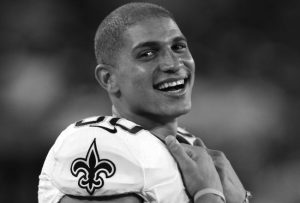