Following the Seattle Seahawks emphatic win over the San Francisco 49ers in the NFC Championship game, cornerback Richard Sherman had a few choice words to Fox’s sideline reporter Erin Andrews. After publicily humiliating Michael Crabtree and causing the Seahawks Super Bowl clinching takeaway, the adrenaline rush Sherman had was clear as he spoke into the microphone. His eyes popped out of his skull. His nostrils flared like some sort of predator. Andrews timidly stood and endured Sherman’s outburst as he explained that he is the best cornerback in the NFL and that when you try him “with a sorry receiver like Crabtree, that’s the result you’re going to get.”

Sherman’s post-game interview naturally caused a lot of commotion. Instinctively, football fans were negative towards Sherman’s arrogance and cockiness. Others loved his confidence and the entertainment he provided for football. The media buzz circulating around Sherman’s twenty seconds on air was in fact a complete circus. Sherman gained thousands of Twitter followers as a result of this interview, many of which ensued with calling him a thug, classless and a disgrace.

Those absurdly harsh judgments are unfortunately a common art among sports fans’ opinions on professional athletes. Never mind the fact that Sherman grew up in a rough town like Compton, graduated from Stanford with a 3.9 GPA, and holds his own column for Sports Illustrated’s online archive The Monday Morning Quarterback. From the Huffington Post, Isaac Saul writes, “If anyone with a brain took the time to learn about Richard Sherman, and then put him in the context of the rest of the National Football League, he’d be a pretty hard guy to bash.” Sherman has consistently done charity work and supported his campaign for keeping students in school.

Whether Sherman has the support of football fans or not is irrelevant. Even the most classy, well-rounded human beings in sports receive criticism one way or another from fans, and that’s not something that’s going to change. But the reactions fans provided in response to Sherman’s interview raise an interesting question: Why do sports fans feel entitled to judge an individual’s character based off of what they see in a game? In other words: why are athletes idolized at all? Being in the spotlight of a media world as vast as the NFL in America will result in a lot of preempted judgment whether it’s warranted or not. The expectancies fans have for professional athletes will continue to be unreasonable no matter what an athlete is actually like off the field. It’s impossible to avoid.

People tend to admire athletes because they live their dreams through hard work. Through that appreciation there are a lot of expectations among the millions of fans that ironically don’t have the experience of playing a professional sport for a living. What kind of sense is that? Muhammad Ali is one of the most beloved icons in sports while simultaneously being a cocky trash talker that stood up for what he believed in. Today Sherman is being ridiculed for the exact same thing.

Sherman’s interview will be a major topic of conversation heading into Super Bowl Sunday. But more importantly it forces fans to think objectively in the controversial world of American athlete portrayal. Richard Sherman is not a thug, or classless or a disgrace. Being unhappy with his trash talk is one thing, but labeling him as the very thing he spent his entire life to try and overcome is irresponsible. As it reads on Sherman’s Twitter: “Confidence is a prerequisite for success.” 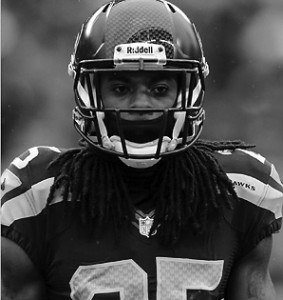