In today’s day and age it seems that everyone, including older generations, is aware of text messaging and its impact on communication. Practically everyone understands symbols such as OMG or LOL. While walking across campus, you will always see numerous people, eyes glued to their phones, text messaging and bumping into each other. Our generation frequently hears comments from older generations such as: “All people your age do is text message!” Yet, while there has been so much hype about the convenience and ease of text messaging, new studies show that this popular form of communication is actually dwindling.
The fact that text messaging is declining may be surprising, considering it revolutionized the way our society communicates not that long ago. According to the telecom prediction survey, the number of texts sent last year dropped 7 billion leaving only 145 billion being sent, while the number of instant messages sent through apps rose to 160 billion. New apps for smart phones now make communication easier and free. Just as our generation loves convenience, any expenses saved (especially on rising costs for cell phone bills) are valued.
The allure of the instant message comes from its ability to send messages through the internet for free rather than at the expense through a service provider. Apps on smart phones allow users to communicate with friends and family without costing a dime. Apps such as Snapchat, Instant Messaging, Whatsapp, Mobile Email, Facebook Messaging and Twitter allow users to message, send pictures and communicate for free. While you still have to pay for your data plan and access to the Internet, using these apps allows people to get around paying for actual text messaging through their service provider.
Not only do the new apps allow you to communicate for free, they also have other characteristics that make them desirable to our generation. For instance, iMessage allows users to create group chats where they can send videos and colorful emoji’s, Snapchat allows users to send pictures for a short amount of time to whom they choose. As a result, tricky telephone numbers no longer have to be remembered as they are being replaced by usernames. These characteristics are especially appealing to younger users who value customization and convenience. While youth values smartphone technology, it is also thought that people who wouldn’t usually buy smartphones, like older generations, are doing so for convenience and to save on expenses. This transition is beginning to coax mobile phone companies to stop making traditional cell phones and instead make smart phones exclusively.
While many people still doubt that the famous form of communication via texting would ever dwindle, studies say it is doing just that. Of course it may be too early to say that texting is out for good, but it is definitely on the decline. The good news is that it is being replaced by new apps that are just as convenient and luckily, free. 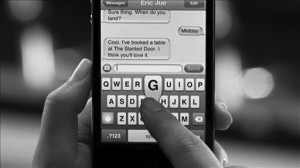