One of the most underrated aspects of a football game is special teams. So, who has the advantage in the big game?

Punting:For a team known for their flashy nicknames such as “Beast Mode” or “the Legion of Boom,” the Seattle Seahawks punt team has quietly been one of the most valuable components for the NFC champions. Put into the simplest terms, the Seattle Seahawks punt team is the second greatest of all time. They allowed a total of 82 return yards the entire season, falling just 27 minutes short in the final regular season game of the all-time record of 49. They entered the finale having only allowed 25 yards. To put this into perspective, two returners more than doubled their 82 yard total in a single game. The Seahawks offense began their drives in the third best positional average in the NFL. There is no reason to even discuss subpar Broncos punt team.

Returning: The return battle is a much closer contest. Seahawks speedster Percy Harvin is lethal in the return game with his blazing 4.3 forty yard dash speed. Denver’s return man Trindon Holliday was statistically the most dangerous since 1970. He had the highest special team touchdown rate since the merger and he would have had more than six touchdowns, which would have eclipsed the great Devin Hester, if not for a few teammate penalties.

Kicking: Both teams are blessed with two of the bestkickers  in the game. They have missed a total of two field goals all year, and have been consistent in the clutch, with neither missing an attempt these playoffs. There is no statistic which truly separates these two.

Head Coaching: Last Sunday, John Fox became the sixth coach to lead two different teams to the Super Bowl; he did it in 2003 with the Carolina Panthers. As for the Seahawks’ Pete Carroll, whatever he lacks in terms of Super Bowl experience, he more than makes up for in terms of college football big game appearances. As head coach at USC, he went to seven BCS bowls in nine seasons, winning six. In the process, he secured two national championships and narrowly lost out on a third. Both men led their respective teams to identical records this season, so who holds the advantage?
Most would argue that the Broncos skipper is better, with the majority citing emotional reasoning for their opinion. People simply hate Carroll for his arrogant attitude and for the way he bolted USC for the NFL. However, the team clearly responds quite well to their Head Coach. 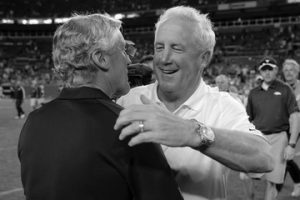