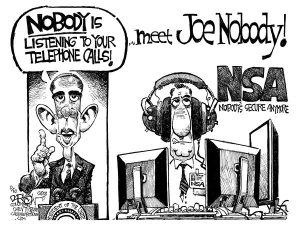 Upon the newfound skepticism and dissent brought about after NSA contractor, Edward Snowden, leaked confidential information,the government has been under extreme scrutiny from at home and abroad. In response, the President has announced a series of reforms and a number of steps at a speech on January 17. These reforms include ending certain programs and placing more restrictions on government agencies in collecting intelligence via intercepting communications, while also touching upon the government’s intelligence practices.
Of the most controversial is the telephone metadata program. which monitors and surveys phone calls throughout the country and abroad, placing them in a huge database. The President claims the program does not store the content of phone calls, but rather logs all phone numbers, times of calls and call lengths in the database. It can later be queried if there is reasonable suspicion that a number is linked to a terrorist organization, whatever a “terrorist organization” can be defined as or what warrants a “reasonable suspicion.”
Regardless of these terms, the program’s termination has been ordered due in large part to the amount of uncontested power it yields and its relative ease of being accessed. Leadership will need to establish a new device without holding this bulk metadata. In the meantime, they will only pursue phone calls that are two steps removed from known terrorist organizations, instead of three. Also, the database can be queried only after a judicial finding or in the case of true emergency.
President Obama has introduced many reforms in the wake of the Snowden controversy in hopes of giving Americans greater confidence that their rights are being respected and protected.
One of the many new reforms is a new presidential directive that has been approved that gives the executive oversight of intelligence activities. What this means is that intelligence agencies will operate with less independence because their actions will be scrutinized by the President and his senior national security team, thus creating a check over the agency in order to balance its great authority.
The government will make more surveillance activities available to the public, to avoid the shock of another WikiLeaks. These declassified documents include opinions and orders of the Foreign Intelligence Surveillance Court, or FISC. The FISC is the institution that contains the controversial telephone metadata program in its reports. More specifically, Obama advocates for the court to hear a broader range of perspectives regarding privacy, so he is calling on Congress to authorize the establishment of a panel of advocates from outside government. This panel will provide to the FISC an independent voice in significant cases regarding privacy.
Some vague restrictions were made by Obama regarding the government’s ability to retain, search and use intercepted communications of foreign targets overseas vital for national security purposes. The President also extended Constitutional protections enjoyed by the American people to people overseas.
The President has placed a restriction on the government’s ability to conduct surveillance on a person of interest without warrant, so that this secrecy will not be indefinite. Instead, surveillance will be conducted within a fixed time unless there is a need for further secrecy.
In order to implement these new reforms, the State Department will designate a senior officer to coordinate the nation’s diplomacy related to technology and signal intelligence. A senior official will be appointed at the White House to implement these new privacy safeguards.
The government faces more implementation problems ahead. Who will be these private citizens involved with the FISC? What specific restrictions are placed upon the government secretly investigating targets, and who qualified for investigation? How long are these new fixed time restraints? Upon awareness of the executive’s standpoint, we ask questions. All for the purpose to create law to constrain those in power instead of depending upon good intentions of leaders in the wake of the acquisition of such unprecedented modern abilities.