As the halfway point of the NBA season approaches, it isn’t hard to see that the Indiana Pacers and the Miami Heat are the favorites to square off in the Eastern Conference Finals. Both teams jumped out ahead of the rest of the sub-par Eastern Conference very early this season and have established big leads over the third to eighth seeds. Considering that these teams will clearly be the one and two seeds (barring an epic collapse), there will be constant debate on which squad is better.

The answer to this question is complicated because these teams are complex themselves. In the last two playoffs, the Miami Heat have defeated the Pacers in six games (2012 Conference Semis) and seven games (2013 Conference Finals). Whenever these two teams get together it makes for an exciting matchup and almost always a very close game making this rivalry the best the NBA has to offer.
Indiana is the better defensive team, but that is due to the fact that they are the best defense in the NBA, allowing 89.2 points per game and a meager .412 shooting percentage for the opposition. Numbers like that have helped Indiana climb to the top of the East through 40 games with a record of 33-7. The Pacers have shown that they are one of the few teams that can stop Miami’s electrifying fast-break offense (led by Lebron James and Dwyane Wade), as long as their bruising frontcourt led by (Roy Hibbert and David West) can establish the paint and block shots.

Let’s also not forget about Indiana’s growing superstar, Paul George who has had a stellar season so far, averages 23 points a game and is also becoming one of the more clutch players in the league. Although Indiana’s defense is a stone wall and George will always pose a problem, Miami knows this team and Lebron always brings his best game. And when the best player in the world is on his A-game: look out Indiana.

Miami has enjoyed another good season in 2013-2014 and currently sits in the number two seed in the East with a record of 29-11 through 40 games. The Heat’s offense continues to be one the most consistent units in the league, putting up 104 points per game and leading the league in field goal percentage with .506. James is having another Lebron-type season as he is behind only Kevin Durant in scoring and has been a surgeon, shooting 58 percent from the field. If these two teams do meet in the Conference Finals for the second year in a row it will be another seven game series full of close games, last second shots and plenty of controversy.

Indiana is having the better season so far this year but it is known that Miami will get hot after the all-star break, especially considering their 27-game winning streak last season. The team that wins this series will be the team that can win on the road and get more production from its supporting cast. As the 2013-2014 NBA season rolls on, this matchup looks more and more imminent, but anything can happen and it goes without saying that it would be a true disappointment if these teams don’t get another shot at each other. 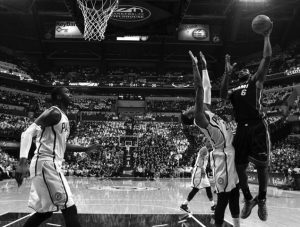