We’ve all done it. Whether your motives were romantic or fueled by boredom and curiosity, nearly every one of us is guilty of checking someone out online. Our generation has become accustomed to the technology of today constantly keeping us plugged into each other’s lives. We are the Millennials, the young adults who made social media the conglomerate it is today. There are countless ways in which social networks like Facebook, Instagram, Twitter and Tumblr have helped to educate and inspire people around the world. However, is there a limit to how far we go in using these social networks? Are we, as self-proclaimed “Facebook Stalkers,” letting our social media prowess change the way we develop relationships, platonic or otherwise? Is this a negative thing, or are we simply evolving as a generation that was built around the technology revolution of the 2000’s?
I will be the first to (not so proudly) admit that I have spent far too much time on a quasi-stranger’s Facebook page…or their Instagram…or Twitter…just because there was a slight possibility that I may have to talk to them in the future. You know the drill:

1. See a cute (or interesting) person in class/at a party/in the Yellow Deli.

2. Add them on Facebook, after you’ve checked out their profile pictures, relationship status and music tastes, of course.

3. Spend even more time checking out one of their friends who might look familiar, but you’re not sure so why-the-heck-not-oh-no-I’m-twenty-profiles-deep-dear-God-help-me.

While this kind of behavior may seem borderline unhealthy to our parents and grandparents, who grew up on the mentality that in order to really “get to know” a person, you had to have real, honest and gritty face-to-face interactions with them, this isn’t a foreign concept to people between the ages of thirteen and thirty. Having access to nearly everyone and their mother’s information on a daily basis has given us all a sense of privilege; we can learn anything about anyone at any time, and they can do the same to us. This isn’t a bad thing, though. Fifty years ago, people were still finding out information about people they were interested in without actually getting to know them first. You could talk to that person’s friends and family in order to get the low down on what kind of person they were so you could make the executive decision to get to know them or not. Social media has just become a new medium for people to communicate. This is our evolution as a society fueled by technology.
Don’t believe me? In a I survey posted on Facebook and Tumblr, those who chose to participate were asked four questions, with the preceding statement:
Our generation is guilty of a lot of things, not all of them bad. However, one thing we are guilty of is an extensive knowledge about how to learn things about people before we embark on a relationship with them, romantic or not. No matter the social network we choose to “stalk” people on, it’s become an epidemic. Social networking has changed the way we, as young adults develop our day-today relationships.

The questions were as follows:

4. Have you ever “stalked” someone on Tumblr?

Over 100 people responded, and the results were not surprising. 90 percent of participants said that they had spent time on someone’s Facebook page, 62 percent  on Instagram, 60 percent  on Twitter, ad 38 percent on Tumblr. These numbers are indicative of how dominant a force social media has become in our day-to-day lives. If 90 percent out of 136 people answering my survey admitted to checking people out on Facebook, would those numbers multiply or stay constant if the survey were given to an even wider base?
We have transformed ourselves into a society that revolutionizes what it means to get to know a person or to start a relationship. Although there are those that will insist that communication needs to stay the way it had been pre-technological revolution, it is a simple fact that our world is changing with every new app or social network that is thrown into the air. The percentages of people who admitted to being guilty of checking people out on their online profiles is a clear example of how the means of getting to know a person have completely changed since the twentieth century. Whether or not you choose to accept this change in our culture is completely up to you.
We are a constantly evolving species. We’ve gone from not knowing that the Sun was the center of the universe to putting a rover on Mars. We started out as a species that was discouraged from learning how to read and have blossomed into a plethora of languages and knowledge. We who choose to go with the ever-changing tides of our technological culture may be labeled as being “creepy,” or as “socially awkward,” but that just isn’t the case. This is what our culture has become. The means of communication are changing, and one can only surmise where they’ll be taken next. 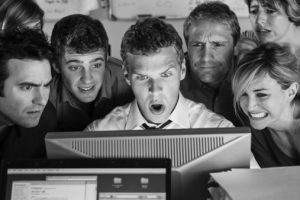