Starting college in the 2000s, we have begun to see the transition from traditional texts to recently popular e-books. This electronic design may seem new and innovative, however the patent for e-books has been around since the 1960s, and in the early 1990s the company SONY claimed e-books as “the library of the future.” Due to the lack of resources in the 1990s and the technology-illiterate generation, e-books were not able to sell as much as early companies would have liked. Now, e-books and e-readers are extremely popular. According to Harrisinteractive.com, one in six Americans use e-readers over traditional print books. Although statistics prove that there is an increase in usage, people often wonder what the pros and the cons of e-books versus traditional books are, especially in an educational setting.
As college students we often find ourselves responsible for purchasing and keeping track of multiple books in a semester. With the accessibility of having all books and texts in one place, and e-books as a generally cheaper option one would think the presence of an e-book would be more prominent on campus. One benefit of e-books is obvious— it’s less of a hassle to have all books in one place rather than finding a place to store all of your books. Also, e-books offer a variety of functions that a traditional text can’t provide. In an educational setting, some education majors would agree that e-books and devices are more helpful and resourceful than traditional books. With the new devices students are able to highlight and save their notes, they’re able to define words by the tap of a finger, and they’re able to share notes with other devices.
Teachers can also prevent students from accessing other applications so that distractions are minute. Another benefit is for students with special and diverse needs. It is easy to adapt the material. For example, font can be made larger, text can be spoken and translated versions are available to download. Senior and English education major Jessica Samplaski said, “Educationally, it is most important to focus on the needs and learning preferences of students. If the student is more engaged and inclined to appreciate the reading experience through an e-book, that’s terrific.” Samplaski also added that she “hopes that traditional classroom libraries never fall by the wayside because there is nothing like holding and smelling a good book, and students deserve to have both experiences.”
By adjusting to electronics as a society are we depriving future generations from the experince of cracking spines, smelling books, and feeling pages in the fingers? Or are we making improvements in education by offering this technology? This is a debatable topic because of the differentiating experiences that people have using e-readers, especially the students that often find themselves easily distracted. Although in a school setting teachers can prohibit the use of apps, we ourselves don’t have that ability. Instead of studying in the library students may find themselves using Kindle’s “Facebook” app, or searching their friends’ Twitter feeds on their Nook. Senior Emily Hillel said, “I still like real books because of the experience of opening the book and getting lost in it. With e-books, it’s easier to get trapped in the technological world when there’s an app on your device for the Internet. It’s an easy distraction, especially while studying.”
For others, it’s a matter of preference. Senior, Amanda Losardo says, “Although I do have a Kindle, I still like traditional books as well because it actually hurts my eyes to read from an e-book for too long especially the small print of a textbook.” E-books offer a variety of different resources and tools that can have the ability to be helpful. Traditional print books will remain a constant to some, but as we switch over to a technology-based society, e-books are a resourceful alternative. Maybe you will just have to figure it out for yourself. 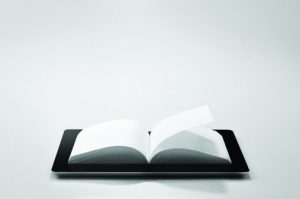