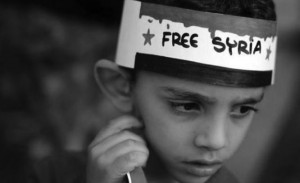 For the first time since the civil war in Syria began, the opposing sides of the conflict are meeting face to face. Representatives of Syria’s leader, Bashar al-Assad, and the leaders of the opposition have convened in Geneva, Switzerland with hopes of ending the three-year civil war. The potential for constructive dialogue between the two sides brings hope, yet many around the world remain skeptical as to whether the talks in Geneva will produce meaningful results, if any at all.
The conference in Geneva came as a result of many months of diplomatic negotiations between the United States, Russia, the United Nations and the opposing sides of the conflict. For many months, both the Syrian government and the rebels refused to take part since the opposition refused to negotiate unless Bashar al-Assad would agree to step down. However, after the United States threatened to abandon the Syrian opposition if they refused to negotiate, the opposition reluctantly agreed to join the negotiations in Geneva. With the rebels no longer making demands, the Syrian government also agreed to join the conference. Then, a few short days before the conference began, the UN surprised and angered the United States and the rebels by inviting Iran to attend the peace conference.
Iran is Syria’s main ally in the Middle East and is headed by a government that views itself as the leader of the Shiite sect of Islam. Bashar al-Assad and his supporters are also Shiite Muslims, thus strengthening the Assad–Iran relationship. Iran has been supplying Assad’s regime with weapons, training and even soldiers in order to help them win the civil war. It was because of Iran’s meddling in the civil war that the Syrian opposition and the United States were angered by the invitation to Iran. For a few short days, the prospect of the negotiations taking place remained doubtful because the opposition stated they would not take part if Iran was present. Due to this pressure, Iran’s invitation was eventually withdrawn and the Geneva peace talks began.
It has taken a very long and concerted effort by the international community to make the conference in Geneva happen. In this regard, as well as the fact that this is the first time that both sides of the civil war are negotiating, the conference is a success. Beyond this the likelihood of any progress being made towards ending the violence remains bleak since neither side can agree on any of the key issues. While the two delegations in Geneva continue to argue and blame one another for the war, hundreds of thousands of Syrians are being killed or forced into refugee camps. As diplomats drag their feet towards reaching a deal, the suffering of the Syrian people will inevitably continue.