During the 90s, Michael Jordan took the league under his wing and changed the NBA. If you ever ask someone who the greatest player of all time is, they’ll quickly say his name without hesitation. But when he left the Bulls, it was time for the organization to turn the page and pursue other interests.

Many years later, the Bulls scored big when they drafted Derrick Rose first overall in 2008. His early success proved that this was the right pick, especially with him winning the MVP award during the 2010-2011 season.

The Chicago Bulls had to endure their superstar and franchise player missing the entire 2012-13 season due to recovering from ACL surgery. In the first game of the playoffs against the Philadelphia 76ers, Rose went up for a floater and landed awkwardly. A season filled with high hopes and championship aspirations ended with heartbreak and everyone knew their chances of winning had diminished, and it was made evident with their first round elimination.

The city of Chicago was delighted to have Rose return this season, but the “bad old days” reigned down heavily in a game against the Portland Trail Blazers when Rose came up limping with what appeared to be another knee injury. According to ESPN sources, he tore the meniscus in his right knee and surgery ended his season. He is expected to make a full recovery, but once again, the Bulls will have to go on without their leader.

Rose wasn’t having his best season, as he struggled from the field prior to the injury. He averaged 15.9 points and 4.3 assists per game on just 35 percent shooting. The former MVP had an impressive preseason, but failed to get off to a good start in the regular season. Some wonder whether or not Rose was confident attacking the basket. We can attribute his struggles to him not yet being comfortable because he is a better player than his season numbers detailed.

Unfortunately, we won’t see Rose until next season where he will again be returning from yet another season-ending knee injury. Now we have to wonder whether or not Rose will ever be the same player. After two knee surgeries, the question now becomes is whether or not his is career over? And that’s not speculating if he’ll come back, (because we know he will) but it’s simply to just probe: Have we seen the last of Rose as we have known him?

We were all expecting Rose to come back and have a monstrous year; many had Rose winning the MVP again this year. Was that plausible? Well, after resting the entire year, it was assumed that he would come back  100 percent and after a few weeks of getting into game shape he would show the league what they had been missing. With Rose in the lineup, the Bulls immediately transformed from “just another team in the NBA” to a contender. The notion was that they would continue to be the defensive unit they were accustomed to being under Coach Tom Thibodeau and his presence would ignite their team and push them forward. Without Rose, the Bulls struggled offensively, so you would figure the one-time MVP would bring that element back into their game.

Last year, the Bulls elected to keep their whole unit together and just wait for Rose to return. Now, they have to go out and make some moves because they have been playing the waiting game too long. Rose may very well be your franchise player, but with him developing the injury bug over the last few years it’s time for the front office to bring other guys in. Some speculate they will amnesty Carlos Boozer or look to deal him to another team. This may be the first step for the Bulls in putting a championship caliber team on the floor every night. The last thing the Bulls want is to have Rose’s injuries and his contract hold their organization hostage. 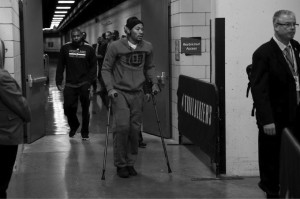