Tyriq Butler, Staff Writer
Michael Jordan has been to the NBA Finals six times and has won the championship each time he has been there. But Jordan made headlines for a different reason this past week when he revealed to everyone his “unbeatable pickup team.” This sent waves of debate around the sporting world, with many ESPN analysts vying to come up with their “Greatest Five”, one that would be unbeatable.

Jordan named Magic Johnson, Scottie Pippen, James Worthy and Hakeem Olajuwon as his teammates in a pickup game. With extreme confidence Jordan says, “I got no chance of losing, none at all.”
I’ve come up with my own ultimate starting five: Lebron James, Michael Jordan, Kobe Bryant, Tim Duncan and Kareem Abdul-Jabbar. \

A major issue that is asked is: How can Kobe and Jordan coexist if they both are so dominant with the ball? The answer is simple: Lebron James. Lebron is gifted and extremely talented.His strength, scoring ability and fancy dunks are not labeled as his best feature. The one part of his game that is overlooked is his ability to mesh the talent on his team. His court high IQ and game management are great features, and the maturation he experienced in route to his first championship solidified him as one of the all time greats.

Many said that LeBron and  Dwayne Wade couldn’t play together because they were too similar in their styles. Next thing you know, they’re in the finals for three straight years and have two rings to show for it. Place Lebron James on a Heat team that has a wide range of talent, and he’ll win you two titles. Make him the captain of the U.S. Olympic team that has superstars who rely heavily on having the ball in their hands, and he’ll find a way to get these guys to play well together and bring home a gold medal. The last test: Make James the floor general on a team with Jordan, Bryant, Duncan and Kareem and their biggest problem won’t be team chemistry, but rather who’s taking the last shot. Which is not really a problem, but since it’s plausible to proclaim that any of them can do so. If you ask any coach, they’d tell you that this would be an issue they would welcome with open arms.

On this team, LeBron James wouldn’t be asked to be a scorer. All he would have to do is what he does best, and that’s put his teammates in position to do what is needed. James is excellent at maximizing his team’s talent, and distributing the ball  effectively. Lebron can run pick and rolls with Duncan, leading to plenty of open shots. In addition, he can throw the ball in the post to Kareem, and he’ll deliver with what many call “the most unguardable shot ever,” the skyhook.

Kobe’s a better long-range shooter than Jordan, so playing him at the small forward position would be smart if you’re looking for three point shots from that position. With these two at the wing positions, Lebron can take turns giving them the ball because these natural born scorers are going to produce.

James’ ability to mesh the talent and create synergy on and off the court is exceptional. Jordan and Kobe will both get their shots up, with Lebron playing the mediator role. Tim Duncan is arguably the best power forward of all time. If I’m looking for a life saver, and it has to come in the form of a “Greatest Five” with respect to a pickup game of basketball, look no further than this team of natural born assassins that has combined for 24 NBA championships. 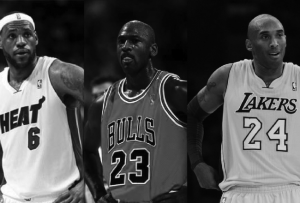