On August 30, very important news came out of the National Hockey League and no, it had nothing to do with work stoppages, rule changes or conference realignment. This news was a celebration. Anaheim Ducks forward Teemu Selanne, 43, announced that he was coming back for his 21st and final season. The Finnish star’s decision to keep playing was a joyous moment for all of hockey. While it will be sad to see him go, fans will get their chance to properly send off a legend. Selanne has played for the original Winnipeg Jets, Anaheim Ducks (two stints), San Jose Sharks and Colorado Avalanche.

During the 1992-1993 season with the Jets, the “Finnish Flash” took the league by storm by setting the rookie goals record with 76, giving him the Calder Trophy as the rookie of the year. Selanne is one of the best pure shooters the game has ever seen, scoring at least 40 goals in a season seven times, as well as being a 10 time All-Star. At the end of the 2006-2007 season, he finally reached the ultimate goal and became a Stanley Cup Champion. He and the Ducks defeated the Ottawa Senators in an epic seven game series.

On November 8 against the Buffalo Sabres, Teemu played in his 1,400th NHL game, which is third all-time for all European hockey players, only trailing former Red Wings defenseman Nicklas Lidstrom and current New Jersey Devil, Jaromir Jagr. He is currently ranked fifteenth all-time in points (678 of which were goals.)

Selanne has been just as impressive in the Olympics. He has participated in five winter games, holding the record for most points in men’s Olympic hockey history (37) and may still be named to his sixth this winter in Sochi, Russia. While on the Finnish National Team, Selanne has won two bronze medals (1996, 2010) and a silver medal (2006).

Another reason why Selanne is so beloved is because how much he loves and respects the game. At the end of the 2005-2006 season he was awarded the Bill Masterton Memorial Trophy. This award goes to the person who shows true sportsmanship and overcomes adversity. He was almost forced to retire after the 2003-2004 season due to a knee injury, but the lockout that cancelled the next season gave him ample time to rest and get back to full strength.
As time has passed, Selanne’s skills have slowly started to deteriorate. He may be a couple of steps slower and he may have lost a couple of miles per hour on his slap shot, but he makes up for what he lost with his knowledge of the game. No one is better at positioning themselves or seeing a play develop as he is, while still having the youthful exuberance he showed as a kid in his early twenties with the Jets.

This season has not been what Selanne hoped it to be. On October 29, he took a high stick to the mouth from Philadelphia Flyers forward Brayden Schenn. He lost several teeth and needed oral surgery. In total he missed three games, but returned ahead of schedule to face the Phoenix Coyotes on November 6.

Regardless of the outcome this season, he will be remembered as one of the greatest ever to lace up the skates and in three years, will without a doubt be elected to the Hockey Hall of Fame in Toronto, Ontario. Let the celebration begin. 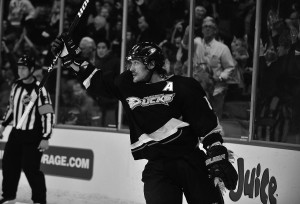