The Miami Heat have become what any opposing fan loathes: a dynasty. In their third straight NBA finals appearance, Ray Allen stole a crucial Game Six, forcing an epic Game Seven match up in Miami. The savviness of the Spurs turned out not to be enough against the raw talent of LeBron James and the Miami Heat. In 2010, LeBron announced his departure from Cleveland and his Miami arrival, and fans have either loved or hated the Heat ever since.

With the 2013 NBA season just underway, the prognosis among most fans is that the season is hopeless. The common belief is that the Heat will coast through the regular season (as they did during their twenty-seven game winning streak last year) and retake the NBA Championship for a third time in their fourth finals appearance. History, however, suggests that four consecutive championship appearances is a tall order.

The Boston Celtics were able to do it twice. The first time occurred during a ten straight championship appearance stretch from 1957 to 1966, in which the Celtics were able to win nine of those times. This era of basketball is exactly why Bill Russell is such an icon in NBA history.

The next team to make it to at least four straight championships was the Los Angeles Lakers, led by Wilt Chamberlain. The Lakers were a feared force in those days, making the championship nine times throughout Wilt “the Stilt’s” career. Chamberlain’s career averages are over 30 points and 22 rebounds per game. The rivalry between Chamberlain and Russell throughout numerous championships was one of the most legendary matchups in NBA history.

The only other time a team was able to go to the championship four times was the Boston Celtics again, but this time as a very different team in the 1980s. Led by Larry Bird, the Celtics played the Lakers three times in that four year span. The Celtics came away with two championships, but Magic Johnson and the Lakers proved to be too much for them on the other occasions. Bird against Magic revitalized this historic rivalry between the Celtics and Lakers, and it was unquestionably some of the greatest basketball that has ever been played throughout the history of this game.

Bill Russell, Wilt Chamberlain, Larry Bird…LeBron James? If the Heat make it to their fourth straight championship, James will be in the company of those historic basketball figures. James is often compared to Michael Jordan, who has six career championships, but even he never made it to four in a row. In fact, 13 teams have made three straight finals appearances, but only those three aforementioned teams have been able to get a fourth (Bleacher Report).

In addition, the Eastern Conference is completely revamped this season. The Indiana Pacers, Chicago Bulls, New York Knicks and Brooklyn Nets have all improved after the offseason. If the Miami Heat can overcome all of these factors upon them and win their third straight championship in four years, the four-time MVP LeBron James deserves even more respect than he’s already received.

History’s against them, the competition’s against them and a fair amount of fans are against them. But only time will tell as the Miami Heat attempt to chase the crown yet again. 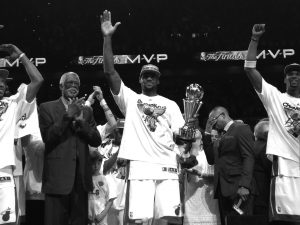