With “NO BLUES,” their fifth album in five years, Los Campesinos! have arrived at a sound that embodies both the melancholy and in depth reflection on the futility of life, while also avoiding the pitfalls of taking one’s self too seriously. In fact, frontman Gareth Campesinos undoubtedly revels in his sadness in a manner that, at the very least, approaches being completely over the top. What else could one expect from a band with an exclamation point in their name and an album title in all caps? 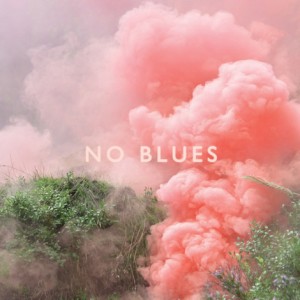 Now, most bands with Los Campesinos!’ vision would likely need to ground their ambition or risk an ultimately insincere sound for their final product. Gareth Campesinos, however, seems unconcerned with this notion, and rightfully so, sporting adept songwriting that transcends the usual hazards of forward thinking pop music. He has crafted a prose that is both uncompromisingly literate and deeply relatable. This is the basis around which Los Campesinos!’ aesthetic is built. Explore their discography and take note of the band’s evolution from spindly, in your face pop-punk, to a sound with slightly softer edges, all embedded in a darker atmosphere that remains true to the charisma of their earlier records.

While this album is certainly framed in a rather gloomy context, it also exhibits a reserved (or in some cases not so reserved) hopefulness that’s hard to describe further without using “Los Camp” as an adjective, but I’m trying to be taken at least sort of seriously, so we’ll stick with “reserved hopefulness.”

The album leads off with two of Los Campesinos!’ catchiest songs to date, and likely the most optimistic tracks on the album: “For Flotsam” and “What Death Leaves Behind.” Now, I know what you’re thinking, and yes, you read correctly; the brightest moments on this record are indeed tunes dedicated to an ex-girlfriend and death. While perhaps not the brightest among us, the album’s heart is found in tracks “Glue Me” and “As Lucerne/The Low.” “Glue Me” is a relatively slow, dark lament, similar to “To Tundra” and “The Sea Is a Good Place to Think of The Future” from past albums. The track’s mournful observation that “one of us will be gone before bells of this other chime” and others like it, coupled with the dreary atmosphere, depicts Los Campesinos! in their most vulnerable state. “As Lucerne/The Low” has all the elements of Los Campesinos!’ best work: dry humor, brutal honesty and an infectious (albeit dark) chorus. This track effectively makes light of the sadness described in the previous song and relieves some of the tension with quips like “I hum the sorriest tune on the bar at these dives/Send all the patrons running home to make up with their first wives.”

For those previously acquainted with Los Campesinos!, “NO BLUES” will come as a welcome addition to their discography as it furthers the maturity of their sound and lives up to the high standard they’ve set for themselves. Newcomers may find a new favorite in “NO BLUES” and view their infectious personality as a welcome relief from the electro-pop that has permeated the music scene as of late.