Any female knows that getting your period is, oddly enough, like some sort of bonding ritual. It means blaming your bad day on your cycle and expecting the girls to understand, or moaning under a blanket on the couch, clutching a heating pad and then passing along the prized bottle of Midol. As much as we ladies make the best of our menstrual cycles, we don’t necessarily always want to deal with that time of the month. But when you’re living among women, we all seem to assume that it could be out of our control.
It turns out that “syncing” doesn’t just mean pairing your overly priced apple product up with your itunes library. It’s much more biological than that.  Gentlemen, you might want to sit down for this one, because it turns out, not only can women fit whole human beings inside their uteri, but it seems their menstrual cycles can sync up too. Well, at least most women hold this as scientific truth. Frankly, the best way to put it is that there is some kind of vagina telecommunication between females who spend a lot of time together.
As a graduate student in 1971, Martha McClintock published a now famous paper, which affirmed the relation of the beginnings of a menstrual cycles among women living together. Since this time, there have been various studies attempting to arrive at a definitive conclusion, whether it refuted this statement or claimed its legitimacy. At the very same time, women all over the globe continue to believe in this mysterious menstrual connection, so much so that it has possibly become more myth than science. 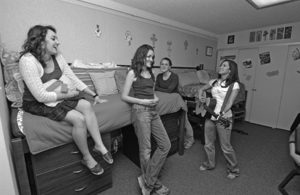 Over the years, there have been complications within these various studies of synchrony. Studies could have been thrown off due to the lack of a “baseline,” the irregularity of when many women (living in the same space) would be getting their period, and other contributing factors such as birth control, could bring inaccuracy to studies done on synchronic menstruation. Then there is the controversial consideration of pheromones; pheromones are naturally occurring odorless secretions, which “signal” others of the same species. Pheromones have been postulated as a factor of supposed synchronization, but there is not enough known about human pheromones to assume that this could be true.
And lastly, for those of you who aren’t menstrually proficient, a woman on average gets her period between 21 and 35 days for about a week. Many say that this means women’s periods might just tend to overlap, coincidentally occurring at the same time due to different divergences and convergences of cycles.
Don’t worry males: it seems for now, there is no definite answer. Women have insisted, and will continue to insist, that they share the same cycles as the females in closest proximity to them. However, at this point in time it hasn’t been proven as a scientific fact either. For now, maybe it’s just safer for everyone to assume that we are on to something, and maybe we do share this mysterious, unexplainable uterine connection with our female counterparts.