For the first time in 95 years, the Boston Red Sox clinched a World Series on their home field. The Sox downed the St. Louis Cardinals in six games to win their third title since 2004. What many people thought to be improbable at the start of the season has become reality: a team that most critics had written off took the baseball world by storm. This was a series dominated by excellent pitching from both teams.

The Cardinals’ Adam Wainwright and Michael Wacha pitched very well in the postseason, especially Wacha. Every time he got the ball, he pitched a gem; that is, until Game 6, where Wahca finally collapsed under the pressure. For Boston, Jon Lester and John Lackey led the way with dominating performances in Games 1, 2, 5 and 6. Red Sox closer Koji Uehara was lights out as well.

However, the unquestionable star of this series was “Big Papi,” David Ortiz. Ortiz put Boston’s offense on his back batting .688, drawing eight walks and striking out just once. He was the sparkplug for this offense. Timely hitting was the Red Sox’s best friend, both teams’ batting averages were low, hovering around .200. But it doesn’t matter how many hits you get; it’s when and what you do with them.

In an error riddled Game 1 for St. Louis, Mike Napoli hit a 3-run double propelling the Sox to victory. In Game 4, it was Jonny Gomes’ turn. Hitless in nine at-bats, Gomes broke a 1-1 tie with a game-winning three run homer that tied the series  at 2-2. Finally, in Game 6, Shane Victorino hit a 3-run double against the seemingly unhittable Wacha, giving Boston a 3-0 lead that they would not relinquish en route to their title.

Timely hitting was not the only order in this World Series because timely errors were on the menu as well. These came in Games 2 and 3 and garnered St. Louis’ two victories. In Game 2, Boston held a 2-1 lead until Jonny Gomes took a shot at throwing out Jon Jay at the plate. The ball got past Red Sox catcher Jarrod Saltalamacchia and into the pitcher Craig Breslow’s glove; he proceeded to throw down to third base in an attempt to catch the runner. His throw sailed high and another Cardinal scored, giving them the lead in their 4-2 victory.

The following night in Game 3, the Cardinals won 5-4 on a somewhat controversial obstruction call. For those who do not know, an obstruction is called when a defender purposely obstructs a base runners path. This results in an extra base for the runner. Fortunately for St. Louis, this occurred at third base and, like Game 2, resulted in a poor throw to third base.

The Cardinals won that game, their last before Boston won three in a row to take the series. This Boston team exceeded all expectations, came together as a unit after the despicable act of terror at the Boston Marathon in April and gave Boston something to celebrate… a World Series Championship. 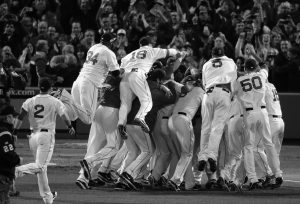