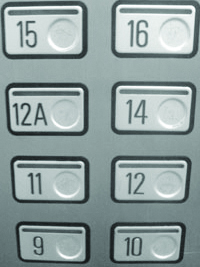 about numbers. Triskaidekaphobia is the fear of the number 13, and people all over the world have a bad case of it.
Thirteen is the most feared number around. It is no lone ranger though. There are a certain group of numbers which people fear.

13– Thirteen is at the bottom of the barrel. It is seen as the unluckiest number in the world. It is so unlucky that hotels often leave out the 13th floor, airplanes don’t have a 13 row and there has even been a term coined for fear of the number 13.
Many cultures have various reasons behind their fear of certain numbers. Some even go as far as creating rules that prohibit certain numbers from daily life. For example, in France it is a matter of etiquette to never have exactly thirteen guests at the dinner table. Even a few past United States presidents forbade holding meetings in the White House with only thirteen people. Often an extra guest would have to sit in to be the fourteenth person. A Friday that lands on the 13 is also considered very unlucky.

7– The number seven is the second most superstitious number. I am sure you have heard the phrase “lucky number seven.” Seven is a universally lucky number. It is the number associated with casinos and certain supernatural powers. In ancient societies the seventh son or daughter was said to be born with supernatural powers. Seven may be one of the only superstitions (besides a four leaf clover) that actually brings good luck rather than bad.

Whether you believe superstitions or not, Halloween is a fun time to explore the scary notions surrounding us. There are three (notice not an unlucky number) words of advice for this Halloween:
1. Hope that your bar tab on Halloween night does not include the numbers 13, 23 or six.
2. Avoid black cats and don’t step on any cracks.
3. Remember there is strength in numbers.

Have a safe and Happy Halloween!