SUNY Oneonta sophomore and  political science major, Lawrence Heller, has been making quite a scene in the bicycle racing circuit this season. Lawrence has finished in first place in his last two races. Despite the recent victories Lawrence says that he is most proud of his 4th place finish at the Tour de Catskills event.What made this event so special were the infamous “airport road” and “devils kitchen” climbs which Lawrence was able to conquer with strength. So how does one balance school and training? Lawrence says that during the race season he rides 10-12 hours per week, which equates to about 150 – 200 miles! Lawrence also spends time in the pool on recovery days. Lawrence rides for team CNYC (Central New York Cyclists.)Team leader Peter Martin says that Lawrence contacted him in his first year at Oneonta looking for a bike club. Since that time Peter has noticed that Lawrence has progressed a lot. “He is a natural climber but has improved his time trial and flat riding as well”. While the 2013 racing season is nearing a close, it’s safe to say that we can expect big results from Lawrence and team CNYC in the future. 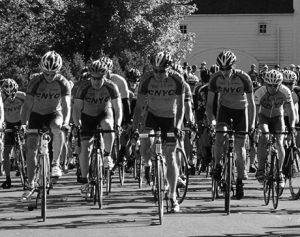