Ben Winters, Staff Writer
The Korean Advanced Institute of Science and Technology has led development on a smartcar they call the “Armadillo T” that takes the meaning of “smartcar” to a whole new level. It has everything you would expect from a mini electric car: two seats, compact size, compact wheels and it’s entirely powered by an electric charge. The Armadillo T, however, adds a brand new twist.
It has the ability to park itself and folds neatly in half in order to save space in the city streets, parking is becoming a larger and larger problem, especially in overpopulated metropolis’ around the world. This feature operates through a smartphone app that is connected to the car’s computer. You drive it to the spot, get out of the car and under the control of your finger, the car parks itself. The back of the car comes over the front of the car, bringing the car’s length in the spot to a mere 65 inches. To put that measurement into perspective, a relatively small mid-size sedan like the Toyota Corolla reaches about 192 inches. When the car folds up, the silver back comes up over the front, giving it a shell-like appearance, hence the name Armadillo. 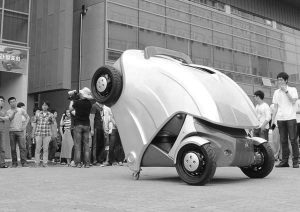 Few things in the car have gone without thought. There are no rear view or side view mirrors sticking out. Instead, all the angles or blindspots are viewable on the dashboard via microscopic cameras, just like some cars currently have backup cameras to assist with parking. It is also entirely environmentally friendly, running 62 miles on a 10-minute charge. The downside of such small tires and the ability to be electrically powered is that the car cannot go over 37 miles per hour. In addition, it is unclear how it would ultimately save space because you need to be able to unfold it in the same place. For example, if there were another Armadillo parked right behind your compacted Armadillo, you would not be able to unfold it until the other car backed up.
Unfortunately, as of now, the Armadillo T won’t be hitting the roads anytime soon. Due to it’s size and construction, it cannot pass mandatory crash tests as well as other safety requirements. Suh In-Soo, one of the professors at the Korean Institute where the car was developed, has urged that the government should relax rules for micro-cars, exempting them from crash test requirements because of their relatively low speeds.
The goal of all of this innovation is to make everyday life “easier”. Whether it be to increase seamlessness or to help people’s conscience about the environment, these inventions help us all feel a little more empowered, a little more inspired, everyday. Whether the Armadillo T gets to market anytime in the near future or not, it’s impacts can be exponential in fueling people’s imaginations.