If I were to tell you that a team  ranked dead last in the ESPN preseason poll, who began the
season  with an unproven rookie quarterback and a lack of talented receivers, and who have lost an all pro defensive face of the franchise while being laughed at more than the Cubs chances to win the World Series, would you believe that they were 4-3? The once written off New York Jets are back, and their winning ways have Rex Ryan back to his loud and boisterous self.  The once sure-to-be fired Head Coach reminded everyone of a few years ago when he boldly stated that the Jets “aren’t afraid of anyone.” Hot off a huge victory against the Patriots, the Jets have people talking about a playoff berth. So it begs the question: are the Jets for real?

The old football adage has always been “defense wins championships” and that games are won “in the trenches.” This squad is playing at a championship level, man handling opposing teams’ offensive lines. Rex Ryan’s bunch sports the second best rush defense per yards allowed, stymieing all-pro running backs such as Doug Martin and Chris Johnson. The front four led by Muhammad Wilkerson is no joke. The Jets have managed to muddy up games and the defense has given them a chance to win every time they step on the field.

The offense is a work in progress. Rookie quarterback Geno Smith has shown flashes of  potential and steadily progressed throughout the season. When he limits his mistakes, the offense flourishes; it’s just that simple. Offensive coordinator Marty Mornhinweg has done a nice job slowing the game down for Smith, leaning on the team’s strong rushing attack. They have managed to keep the defense fresh by controlling the game clock.

If Smith continues to limit his mistakes, the Jets are going to be very successful. With the trade deadline looming, the Jets would be wise to acquire another receiver. That is their most glaring hole and, if addressed, could be the difference maker. They are back to their “Ground and Pound” formula, which was tremendously effective, leading them to back to back AFC Championship games. If they can manage to cut down on their penalties (64 through seven games) A world that spins on its axis came to an immediate stand-still on the night of April 12, 2013. 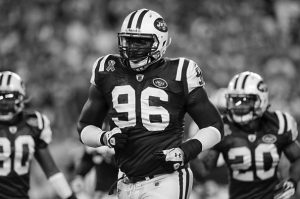