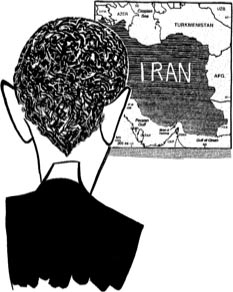 In 1953, the democratically elected government of Iran was overthrown in a military takeover. After the military took control, a new constitution was declared in which the Shah (Farsi for King) became an absolute monarch. For the next 26 years the Shah ruled with an iron fist. Dissenters were often arrested and tortured by the Secret Police. On top of this, the Shah forced western culture upon the people, making it illegal to wear a traditional beard and forcing woman to dress in western fashion. The punishment for disobeying the Shah’s rules was a public beating by police. What made this toppling of a democratic government in exchange for a dictator so profound was the fact that the United States’ CIA provided the money and logistical support to make it all happen. The overthrown Prime Minister had nationalized Iranian oil companies, taking control of the oil away from western companies such as BP. As a result, the west installed the Shah, who for the duration of his rule, gave the United States and Great Britain complete control of the oil.
In 1979, the unspoken agreement between the U.S. and the Shah came toppling down. The Iranian people could no longer tolerate the Shah’s oppressive rule, staging a revolution that would overthrow the king. Since the Shah had represented westernization coupled with oppression, the new government took the opposite ideology, creating the Islamic Republic of Iran. As the revolution was taking place, the United States represented the evils that had allowed the Shah to rule. As a result, an Iranian mob stormed the US embassy and took the staff hostage. Since that moment, the United States and Iran have been bitter enemies.
To this day, the U.S. and Iran have not had any diplomatic relations. If the U.S. wishes to make contact with Iranian leaders, it must do so through the government of Switzerland. On top of this, throughout the last 30 years, both sides have tried to weaken the other. Iran supports the terrorist group Hezbollah and trains radicals in Iraq. Meanwhile, the U.S. supported Saddam Hussein in a brutal war against Iran in the 1980s, even allowing Hussein to use large amounts of chemical weapons. Just when people thought things couldn’t get worse, in the early 2000s Iran declared that it was beginning to develop Uranium, which the west believes was intended to be used to build a nuclear bomb.
Since it became common knowledge that Iran was enriching Uranium, the world has been on edge. Both Israel and the United States have declared that they will attack Iran as a last resort in stopping the building of a nuke. Such an attack could very easily propel the Middle East into a full-blown major war. In order to persuade Iran to stop enriching Uranium, the United States has set up a crippling international embargo on Iranian oil exports, destroying its economy. Despite this, for the past ten years neither side has been willing to back down. However, a new President in Iran was just elected, who has openly stated that he wants to negotiate with the U.S.. This turn of events offers hope that conflict can be avoided, but whether or not the two bitter rivals can negotiate for the first time in 30 years remains to be seen.