At the University of Florida, Tim Tebow was on top of the world. He won two national championships and a Heisman Trophy. Through his winning ways, he successfully managed to mask his many flaws as a quarterback. His accomplishments in college got him drafted by the Denver Broncos in 2010. Fast forward three years and he has hit rock bottom. Tebow is viewed as a mediocre quarterback at best. His poor mechanics and footwork have disabled him from being able to throw the football accurately.

To put into perspective how ineffective he has been in the NFL here are a few stats. The best sample size came in 2011 where he started 11 games. During that stretch, Tebow boasted a 46.5 completion percentage, the lowest mark by a quarterback since Akili Smith’s 44.2 in 2000. (During that span no player fumbled more than Tebow’s 13 or lost more than his six.)

Those are a few of the many statistics that prove he is a below average quarterback. Considering his 6’3”, 250 lb frame, teams have offered him contracts to play other positions. But Tebow is too proud to make the position change, stating he will continue in “relentless pursuit” of continuing his dream of being an NFL quarterback. This brings us to the question, will his dream ever come true?

Whether you like Tebow or not, the man is incredibly popular and has over 2.5 million Twitter followers. A son of Jacksonville and former Florida Gator, Tim Tebow is a god to many in the northern portion of the state. Arguably the worst franchise in the NFL, the Jacksonville Jaguars reside there. Over the past decade, they’ve had the worst record in the league, and their games are frequently blacked out in Florida. The team is first on a shortlist of franchises rumored to move out of the dead pro sports market. The squad is currently 0-2 and showing no signs of improvement. So it begs the question, why not bring in and start Tim Tebow? At the very least it would be entertaining and the team would improve on their league-worst attendance numbers. 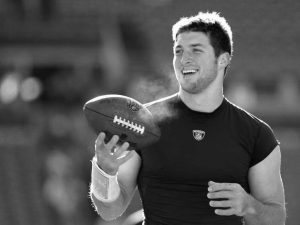